Back in early '88, I had probably been in my first steady job, flipping hamburgers at McDonalds, for about a year. It was the first time in my life that I was pulling in a steady paycheck from working on the weekend, and any money that didn't end up in my savings account, was devoured by my growing addiction of buying music. Each Saturday night, you'd find me at the Mall flipping through the CD longboxes, sweating over which new Metal album I was going to buy with my hard earned money.

Back in the 80's, Dave Mustaine's name carried a lot of respect, and with him producing the debut Sanctuary album, it created a bit of hype. I was looking forward to getting my hands on a copy, and that thing did not disappoint...well, maybe the exception being their cover of White Rabbit...I think that we all could have done without that song. I clearly remember sitting on the edge of my bed at that time, surrounded by the four walls of my bedroom, which had been plastered with hundreds of pictures cut from Metal magazines, and listening to this album. Goddamn...fucking Battle Angels is still an insanely good song.

When Sanctuary's follow up, Into The Mirror Black, was released in early 1990, I thought it was pretty good, but honestly, I was more intested in bands like Slapshot and Sick Of It All, and was quickly moving away from Metal. 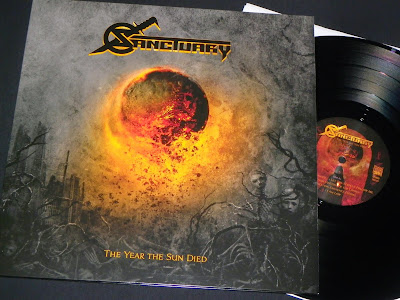 By the time Sanctuary broke up, and singer Warrel Dane started up Nevermore, I couldn't have cared less. Even after getting back into Metal over the past ten years, I still never bothered to check out Nevermore. Yet, when it was announced that Sanctuary were reuniting and releasing a new album in 2014, for some reason I held hope that it was going to be solid. Hey, for most of this past year I'd been riding a Metal high like I was 17 all over again, so I was allowed to hold out some hope that Sanctuary would meet my expectations, not matter how unreasonable and unfounded they might be.

Slightly worried of facing disappointment from my high expectations, I stepped up to check out the band's new video for Frozen....and within the ten seconds it took to bang out a drum into, and then get knocked over by the lead riff, I was on my ass...when Warrel comes in at the 30 second mark, growling his vocals...no matter how foolish he looked wearing that stupid cowboy hat...I was fucking hooked. I was transported back to those Winter months of early 1988, and I was a 17 year old kid again, excited for another solid Metal album. If this Sanctuary album is this good, it makes me wonder what Warrel Dane has been up to with Nevermore over the past 15 years or so. 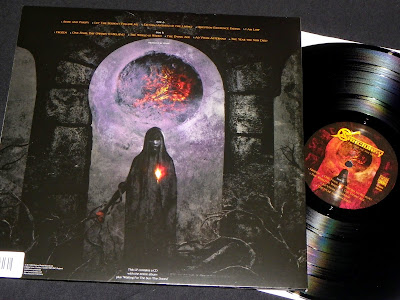 Not making the same mistakes of my 17 year old self, I skipped the CD release with The Year The Sun Died, and went straight to the vinyl. I was tempted to go for the good looking orange vinyl from Century Media, but since they wanted to charge a ridiculous $10 in shipping, I decided to just buy it local, and I ended up with black vinyl.

Thanks for posting about this band. While you state that you never got in to Nevermore...I did, and it's great to see Warrel Dane back doing what he does best. After your post, I had to buy the new album....and it doesn't disappoint.

Hey John! It isn't that I never got into Nevermore...it's that I've never bothered to check them out. After being so impressed with this Sanctuary record, I'm going to have to go back and see what Warrel Dane has been up to with Nevermore.

you should definitely check out nevermores politics of extasy!

Hey Mike....glad to hear that you want to check out Nevermore. I personally would start with "This Godless Endeavor."

I saw them on Gigantour when they were touring for that album, and it's what won me over.

You can check out the track "Final Product" from that album here: