Back in October, I was out with my wife celebrating our 21st anniversary. It was a great night out, just the two of us, enjoying a movie and dinner. It was very romantic as we walked around the city, giggling and holding hands with little hearts floating over our heads, while cartoon baby animals followed us around playfully. It was one of those moments when the two of you are just locked in, and you know that you were meant to be together. While dreamily staring into each others eyes, I got distracted as my phone started buzzing furiously, as notifications popped up one after another from Facebook. Seems as though I was in on a group message with Doug, Marcus and Sandwell, who were going back and forth over the pre-orders for the new Boston Strangler LP that was due to drop in the next 30 minutes.

Oh fuck. How am I going to my phone, and get this record ordered, without appearing like a selfish douche on our date? 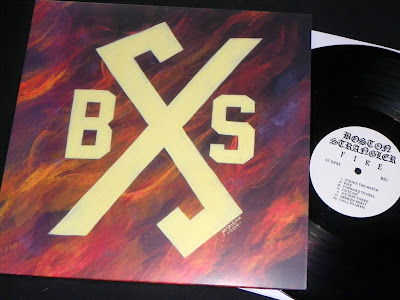 Unless you are new to Hardcore in the past six months, you remember the difficulty in tracking down the first Boston Strangler album. It's not that the label was keeping it to a limited pressing...it was just that they couldn't press them fast enough. Each time they would appear online, in some distros store, they would be sold out in minutes.

I did not want to be in that same position this time around, and I needed to secure a copy as soon as the first pressing was available. I had no interest in playing the waiting game again.

As luck would have it, my wife and I finished dinner, and decided to stop at the Whole Foods store around the corner before heading home. After picking up a few vegetarian treats, I quickly whip my phone out before starting the car...a minute and a half later, I've bought myself the new Boston Strangler album. The date then continues with whispers of sweet nothings. 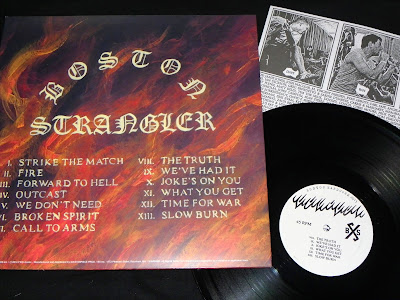 Truth be told, I put off listening to this new album for a while. I didn't bother with the Jokes On You preview cassette, because, well, it is a cassette. But even once the vinyl arrived, I shelved it and didn't bother listening to it for weeks. Sometimes I have such high expectations for a new record, that I delay listening to it out of fear that I'll be disappointed. As I neared the time for this post, I finally pulled out the vinyl for a spin. While I was a bit underwhelmed with the first listen, it has grown on me quite a bit. The first album, Primitive, took everyone by surprise with a sound that was urgent and full of angst...the bar was set high, and it would be tough to follow it up. While Fire feels like it comes up a little short, it is only because you have to measure it up against that debut. This thing still rages.

I've not received my copy yet. But not remotely excited by it. If I didn't have one I don't think I be too fussed.