Jaguarz were a part of the Lockin' Out scene, but I was out of touch with what was happening in Boston at the time, and just like a lot of Hardcore bands at that time, they came and went and I never had a clue. Since the band only released a demo tape, and had a song on the Sweet Vision comp...and even after an epic 13 page thread about them in the early days of the REACT! messageboard...I'd still never bothered to check them out. With Climbin' Aboard doing a limited vinyl pressing, I figured that I'd waited long enough. 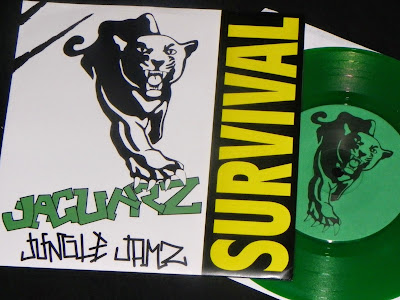 When the record first went up for pre-order, I remember having a conversation with Doug, questioning the need to buy every pressing of this Jaguarz record. I was really trying to focus my spending on other collections at the time, and did I really need to divert that money to this Boston Hardcore band that I'd never heard of before? Obviously the habit of buying one of everything was hard to break, and I still added three copies to my cart and checked out. 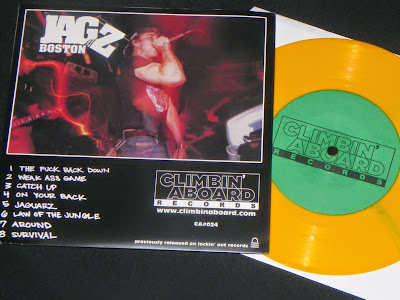 Yeah, the Jagz definitely fall in with that Lockin' Out sound. Great Hardcore style that doesn't get too serious, and they are just having some fun being straight edge kids. I can get down with that. 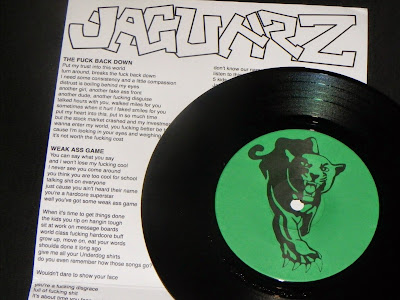 Labels: Climbin Aboard, Lockin Out

Saw this somewhere. Went to the label's store and the green was gone. Emailed my friend and asked him to order me one, but by the time the email got to him the label's store had gone down for maintenance. It's been down for a few weeks and I still didn't manage to get one.

I totally missed out on this. I was actually tempted to buy it off the bay but didn't think it was worth the price.