Early this year, and completely on a whim, I picked up the Hardware record from Krokus. I really wasn't expecting very much, so that fact that it has ended up as one of my most played albums this year is a testament to how much it surprised me.

Shortly after buying Hardware, I was in another record store and happened to find a copy of The Blitz from '84, and suddenly I was diving into a lot of the Krokus back catalog. 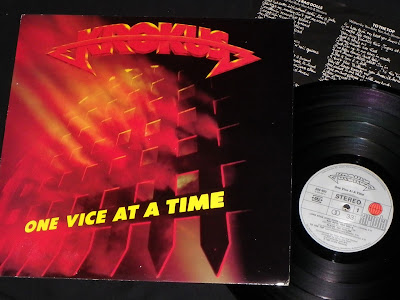 I'm fairly certain that my brother or I owned the cassette for One Vice At A Time when we were young metalheads, but I didn't really remember anything about the album. I feel like we quickly pushed those Krokus albums aside as our musical tastes were getting heavier and heavier...and it is a damn shame because albums like Hardware and One Vice At A Time are fucking fantastic. 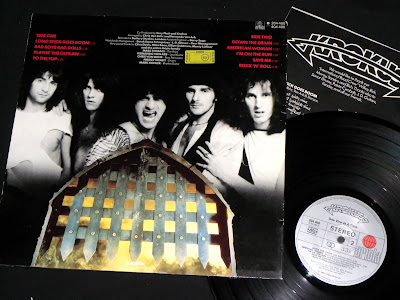 This stuff is pure AC/DC influenced heavy metal. If I'd heard this stuff back in '82 and '83, I imagine that I would have been rocking this stuff right along side Powerage and Flick Of The Switch. 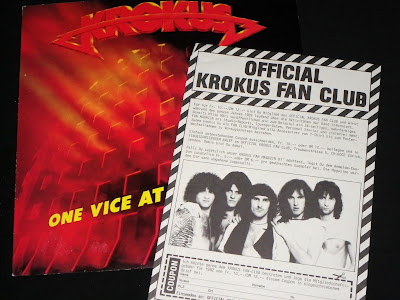 When I was checking out the Krokus discography on Discogs, I noticed that the Swiss pressing of the Hardware album came with a much nicer insert than the shitty record label advertisement insert that came with my US pressing. Suddenly, my copy wasn't good enough, and I vowed not to make the same mistake when I started chasing other Krokus records. When I was looking for a copy of the One Vice At A Time album, I noticed that the album art was a bit different for the overseas pressings...and when I discovered a Switzerland pressing that included the fan club insert, I knew that was the one to have...even if the price was a bit higher than most people would have paid.