I've been chasing a handful of different record collecting goals this year, but one of my favorites has been those albums celebrating their 30th anniversary. When the year started, my collection for 1989 was pretty pathetic, however, the past nine months has slowly seen me pick up some top tier stuff...many of my favorite metal albums from that year. It has been a few months since I've grabbed a classic from '89, so it feels great to pick up another one. 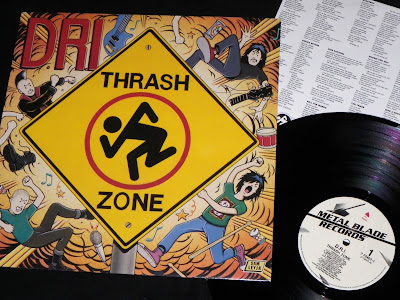 I was still a metalhead in 1989, and while I was buying albums from Sick Of It All and Cro-Mags, I was probably still a year away from really discovering the hardcore scene. The Thrash Zone album from D.R.I. was pretty big transition album between the two worlds for me.

Shortly after a group of me and my friends took a trip to Boston to catch Testament at The Channel, I discovered that D.R.I. were playing in Providence in early 1990. It was a good three hour drive to Rhode Island, and when a couple of friends bailed on the trip, I decided to make the trip alone. This was before GPS and smartphones, I packed a state map in my car and headed in the general direction of Providence with no real idea where I was going. I stopped at various gas stations to ask for directions and drove through some sketchy parts of town, but eventually found the club. Growing up only knowing about big arena shows...to be up front, stagediving with Kurt Brecht putting the microphone in my face to sing along to Suit And Tie Guy, and then having the entire band come out on the floor to talk with everyone...that shit was life changing. This was the real deal, and soon after I was travelling to see Agnostic Front and Slapshot play live, and from there, there was no turning back. 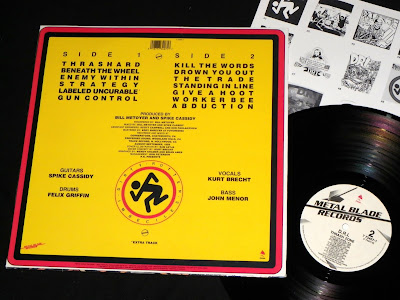 It had been a while since I'd given the Thrash Zone album a spin, but diving into my 1989 playlist this year, I've rediscovered how much fun this record still is. Hey, it is no Dealing With It or Crossover, but fuck, this album is a blast.