The first two Revelation 25th anniversary shows, first in CA and then in NYC, they gave us a shitty live compilation record for each as a souvenir. A nice keepsake, but pretty pointless and not something to really get excited about. I had friend hook me up with the Cali record, and then I went to the NYC and grabbed a copy of that one while I was there. When REV25 takes place in Chicago, they create a 7 inch package with unique pressings of the Gorilla Biscuits, Youth Of Today, Into Another, and Texas Is The Reason records. Figures that the one release I was excited about was also the one that was the most difficult for me to acquire. 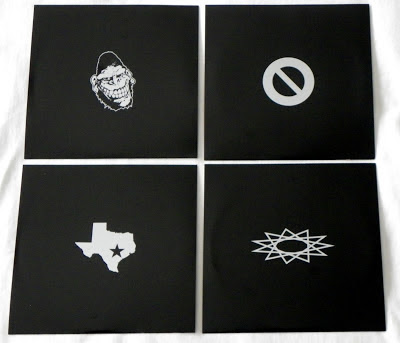 I didn't know anyone going to the REV25 Chicago show, so this meant that I was going to have to hope the label sold the extras in their webstore if I wanted to score a set. Doug was good enough to send me an alert when REV added them to the store, but I was unplugged at the time. By the time I got the message an hour or so later, they were all sold out. When REV put the second round of records in the webstore, they again sold out before I was able to grab one. Third times a charm though, and when REV bundled the 7 inch set along with other REV25 odds and ends, and stuck a $60 price tag on it...that was when I was finally able to get my hands on a set. 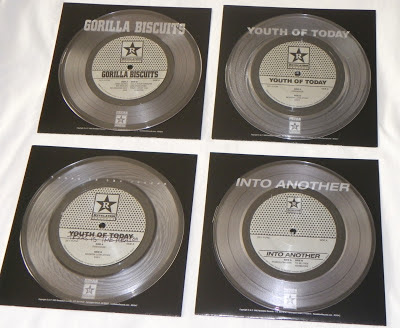 I love the look of these records, as each on gets a start black cover with each band's logo on the front, and is pressed on clear vinyl. 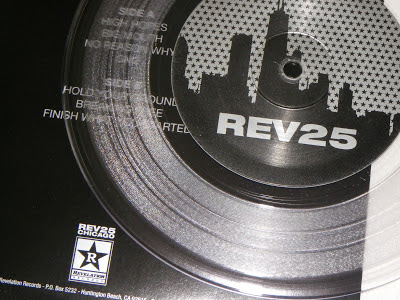 The Chicago skyline b-side labels, along with the REV25 logo on the back cover, is a nice touch. 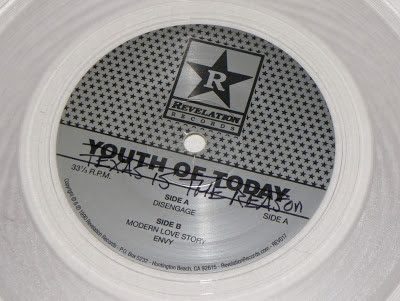 As I was going through my set of vinyl for this blog post, and was taking pictures, I noticed that my copy of the Texas Is The Reason 7 inch had Youth Of Today labels, with the YOT name crossed out and TITR's name hand written. What the hell? I checked Doug's post...nope, his had the right labels. How many were made like this? 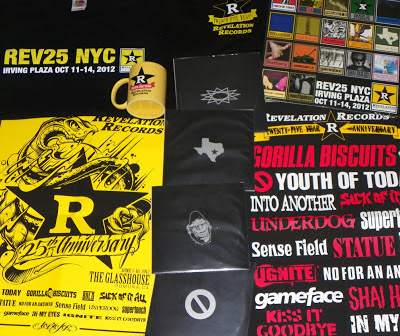 Overall it was a pretty good package deal. I already have the NYC LP, and I'm not too bothered with the posters, but the REV mug and the shirts are nice...especially the NYC once, since I was there.

Labels: Gorilla Biscuits, Into Another, Revelation, Texas Is The Reason, Youth Of Today

There were very, very few of those TITR with YOT labels. You definitely got lucky. Mine just has the normal labels.

I have heard that there may only be 20-25 of those messed up labels.

Where else but in the crazy world of record collecting would people be jealous of, and describe you as lucky to own, a defective product? It has the wrong labels and has some shitty looking handwriting that only corrects the band name (song titles clearly don't matter!), and you're somehow the lucky one. Madness.

Holy Grail! This is hilarious to say at least.

There's two sides to anything, even the world of record collecting. mcs just looked at it from the opposite side,haha! Strong...

I wouldn't really say that it's an exclusive thing to record collecting. People who collect money, comic books, baseball cards... anything like that a factory defect makes an item more collectable.