Late To The Hunt

I'd downloaded the Grand Magus album Iron Will a couple of years ago, but it pretty much just sat on my iPod collecting digital dust. It was good, but it just wasn't something that I was in the mood to spend a lot of time with. When the band released their new album, The Hunt, last year, I read a couple of reviews that weren't very flattering, so I planned on ignoring it. Then Sandwell posted about it on his blog, and absolutely loved the album. Fuck. Now I was going to have to check it out. 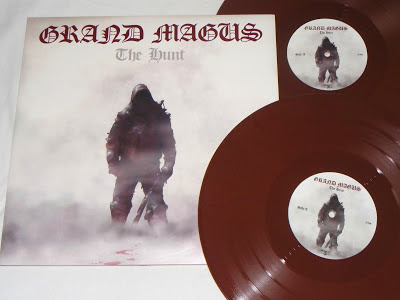 After downloading it, I found that it didn't really do much for me. Still, fuckin' Sandwell liked it, and because I trust his opinion on all things Metal, I stuck with it. I loaded it onto my iPod playlist, and would give it some playing time while I would go out for a six to eight mile runs. I put on a lot of miles last Fall, and over time, The Hunt started to grow on me. As we worked our way into 2013, I found myself consumed with Metal, and listening to a lot of Grand Magus. I knew it was time to finally buy myself a copy. 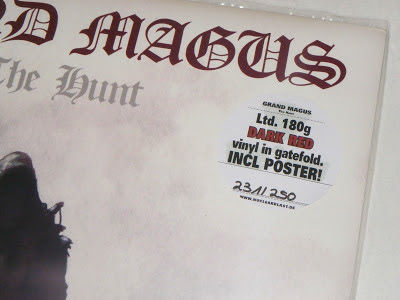 Even though I was late to the party, I was still able to grab the same limited pressing that Sandwell got last year. I found a US distributor that still had one copy left in stock, and gladly bought it. Number 231 out of 250 on red vinyl.

Welcome to the hunt.