It has taken a while for me to catch on to the hype around Violent Reaction. I vaguely remember Sandwell posting about them last year, but I didn't pay too close attention. I downloaded the band's demo, and maybe listened to it once or twice before moving on. It wasn't until Marcus posted about the band's 7 inch that I finally sat up and took notice. 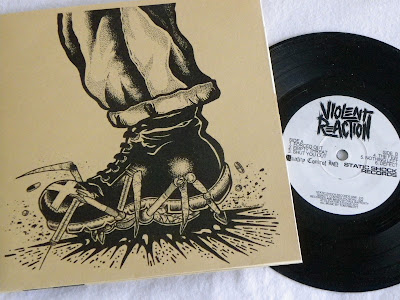 I downloaded the songs from the new 7 inch, and this time there was no hesitation...the comparisons to Boston Strangler and that X-Claim style were spot on, and I was hooked. 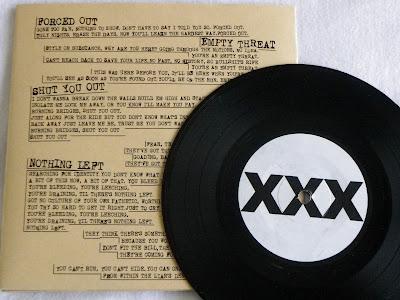 This record has been a pain in the ass. I can't seem to find this version anywhere so I congratulate anyone who picks it up. I will be seeing them in Richmond, Va o the 22nd so hopefully they'll have some with them.

wait till you hear the LP, its absolutely killer!

I think they're currently on tour in the States. I hope you get to see them.

I also think I read somewhere that this is being repressed on some US label. Maybe 6131. So there will probably end up being color vinyl after all.

I just saw them in DC yesterday and they absolutely killed it. They also have color copies of the new LP with them and it's easily my favorite thing I've heard this year so far.

Mike - go see them and buy me a copy of their LP.

Digging this. I've been checking painkiller constantly like a freak trying to score that color vinyl of the LP