I've always been a big fan of music, but things went to the next level when I first bought AC/DC's For Those About To Rock LP in 1981/1982. This was my turning point. I was no longer a casual listener, recording my favorite songs from Casey Kasum's Top 40 radio show on the weekends. Music suddenly became personal...it was mine. My peers blindly devoured the hits that were force fed to them, while I was discovering songs like C.O.D. and Evil Walks...shit that they had no clue about. That was the start of my real love affair with music...over 30 years ago. I've listened to a lot of music over those years, and I still love a vast majority of everything that I've purchased during that time. However, with that overwhelming amount of music, sometimes bands can get overlooked, and as time goes on I can forget about how great they were. 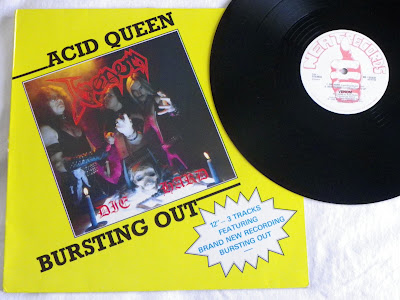 Such was the case with Venom. Now I've been a big Venom fan since 1985 or '86, but I've largely ignored them the past 5 or so years. I've been listening to a lot of Metal this year and while I was going through my 1982 playlist, Venom's Black Metal album started playing. Holy fuck. This shit rules. I immediately headed to eBay to find some vinyl to help quiet the demons in my head, chanting "more records...hail Satan...more records". 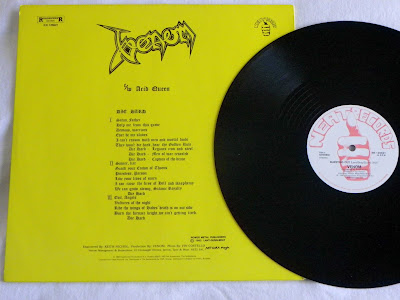 Thankfully, the Metal Vinyl Gods could be appeased with a nice, inexpensive 12 inch single. While this purchase temporarily calmed my lust, listening to these three songs this evening, I can feel the hunger once again beginning to grow. I'll need to feed again soon.

I love metal and grew up listening to all the usual suspects but I could count on two fingers the amount of times I've probably heard venom. I'm sure one day ill give them a proper listen.

Seriously...Black Metal...find it and listen to it as soon as possible.