As a testament to how I'm trying to cut back on some of my record spending, I delayed picking up the new Turnstile 7 inch. I wanted to pull the trigger as soon as pre-orders went up, but I forced myself to hold off a litle while. No surprise that I missed out on the more limited pressing on black vinyl. 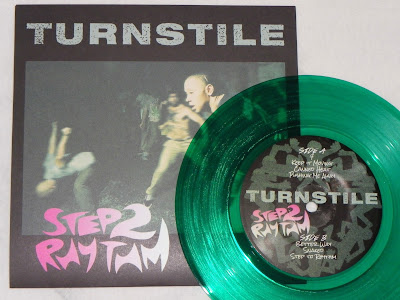 First off let me say, holy fucking shit...how can one of the hottest bands in Hardcore right now, release a record with one of the worst covers that I've seen for a long time. Add in my my utter contempt for the use of numbers in place of words, and its a wonder that I even bothered with Step 2 Rhythm at all. Stupid record name and font, unimaginative cover...and don't get me started on the character dude on the back cover that looks like he has a vagina with a nice bush...Jesus Christ, if it wasn't for the strength of Pressure To Succeed, I wouldn't have given this record a second look. 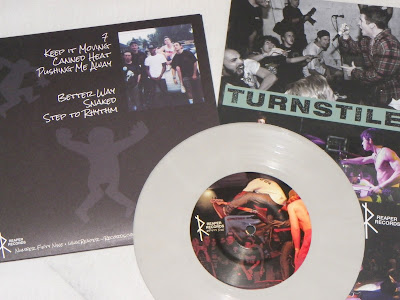 But it is the music that matters, right? So if we look past the packaging, does this 7 inch stand up? At first I was a little skeptical. There are a few "singing" parts on this record that didn't sit very well at first...they didn't seem like they fit, and just felt awkward. But I found that this record settles into a groove after a few listens, and with each spin, I'm liking it more and more. Yeah, this is a worthy follow up to Turnstile's strong debut. Solid.

I think the first Turnstile ep is more modal hardcore a la TUI with their own flavor added. But this one has them grown into that own style/flavor. I think they dared more to be creative and original on this second ep. I'm listening to it all the time.

What you say about the layout of the cover, what's wrong with a live-picture of the moshpit. More original than showing the artist singing live, as many other classic layouts do.

Although I have to admit that the STEP 2 RHYTHM font is too playful and maybe even childish.

Musically, they did push the boundaries a bit, and I'm sure it will pay off as they will have created some memorable songs.

The cover though...yawn. I'm okay with generic live photos for your record cover, but there is absolutely nothing about this cover that excites me. I don't think that this photo captures any kind of intensity...it is just flat to me. Throw that ugly Step 2 Rhythm logo on top of it, and it just gets worse.

Here I am eating a stuffed bell pepper while reading your post, and I almost spit up my food and started choking when I read the part about the dude with the vagina on the back. Holy shit that is fuckin funny. I totally agree though dude, terrible name and cover. I'm glad I got the black and white vinyl though. I passed on the green vinyl, but it looks the best of them all. I hate it when reaper does this, just be normal and release like 200 on green and a million on black.

Knew it would grow on you with a few spins Mike