Sometimes I'm easily influenced. On February 12th, I saw that Anger Battery put some test pressings up in their store. The label was looking for some extra cash to help fund future projects, and while I wanted to help out, I convinced myself to save my money and walk away.

On the 24th, Marcus posted about the two tests that he had bought.

By the 27th, I had placed my order for the one remaining test press that Anger Battery had available. 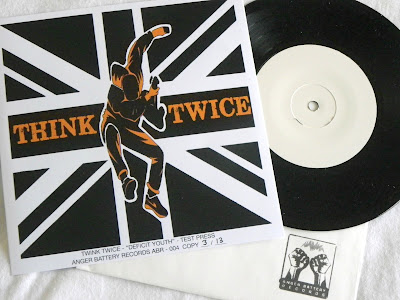 Yes, just seeing that Marcus picked up a couple of tests, was enough to break my will. Actually, I was pretty surprised that the label still had any of the test pressings available. I grabbed a couple copies of the Think Twice 7 inch last year...great stuff...so I was happy to get the test pressing for this one as well. Thanks for the push, Marcus. 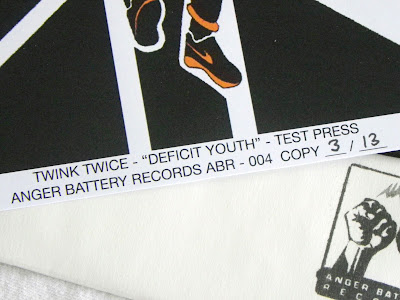 I'm sure your wife wouldn't thank me. Over the years I've probably influenced you into spending quite a lot of the household income on stuff you were trying to avoid.

Yeah, she pretty much thinks you're a dick.

Haha! No doubt I got the blame for that In My Eyes 7" you paid big for too.