Mindset Give And Take

Back at the end of January, Ev from Mindset/REACT! threw up a link on Facebook stating that the first three people to donate to support Aram's Ride To Conquer Cancer would get a copy of Leave No Doubt on clear vinyl. I was working from home when I got the message, and within seconds I was out of my chair and running to get my credit card. I tend to leave my wallet in my car, so I charged out to the garage to grab it. On the run back to the house, I tried to clear all four stairs at once only to have my slipper fly off, and to land on my hands and knees, leaving a nice gash in my shin from the stair tread. No time to address the wound now! I grabbed my slipper from the ground, and rushed back inside, quickly made my donation, and fired off an email to Ev. Blood was running down my leg, but damn it, I had secured myself a copy. 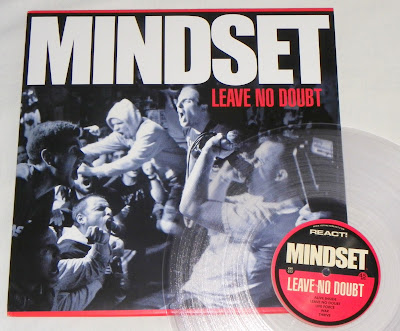 The clear vinyl pressing was exclusive for Mindset's European tour, and limited to 300. So glad I was able to get a copy by just donating to a good cause. 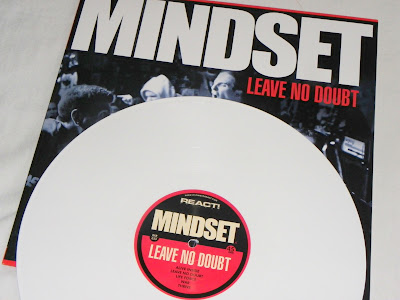 A couple weeks later, Mario left a comment on my Mindset post asking for my address. He said he had a surprise for me, and since I like surprises, I fired off an email to him with my info. Mario does the Across Your Face blog. He drinks, collects guns, and listens to too much oi! music...none of these things I understand...but the important thing here is that Mario is a good dude.

When Mindset came through town on their Cali tour, Mario was there and grabbed me a copy of Leave No Doubt on white. These things were only available on Mindset's tour and were limited to 100. Not only did he go out of his way to get me a copy, but he wouldn't let me pay him for it. Nope. "Just keep me in mind if you encounter any sweet tour pressing vinyl in the future", he said. Solid, solid dude. 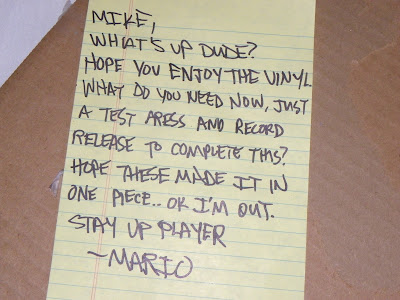 Mario is correct. I'm just missing a test press and the record release version. After watching a record release pressing sell on ebay, I figured that I take a chance and email Ev Mindset directly to see if he had an extra copy that I could buy off him. Hell, I'd rather give the money directly to the band instead of someone just flipping on eBay, but I got no response to my question, so I'll suppose I'll have to be on the hunt with eBay. 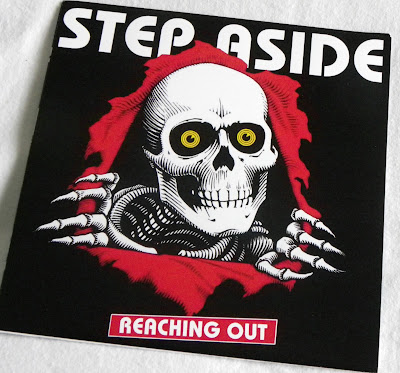 In addition to the Mindset record, Mario also grabbed a copy of the Step Aside record that the band had with them on tour. I love a good tour pressing, and this Powell Peralta cover is top notch. 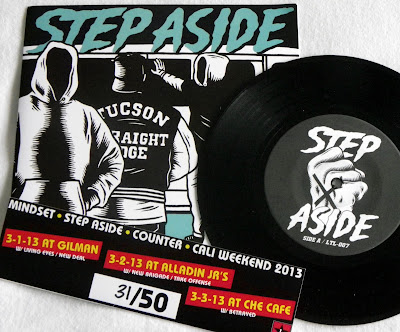 Hand numbered and limited to 50 for the Mindset/Step Aside/Counter weekend tour. This is the 8th copy of Reaching Out that I own. Wow. How did that happen?

Thanks again for the records Mario. Best of luck on your ride, Aram.

Wallet in the car?? Slippers??? What the hell?!?!? Mario is a legend though

Jake I got your shit too bro. This weekend I'm gonna head to Fed Ex and DHL and see if I can find shipping for cheaper... If not I may just have to have you pay for shipping. It cost me $2.99 to send this to Mike, yet they wanted $40 to send it to you? FUCK USPS!!!

The wallet in the car / slippers / shin gash story made me laugh out loud. Absolutely brilliant!

Cool that you scored these rare colors on this one. I figure I'd be happy with one copy of this one, and pretty much any one, but I don't fancy ordering from that Hellfish place for some reason.