Suicidal Tendencies, Excel, No Mercy...I love those bands, and have since I first heard over 20 years ago. Somehow, over those years, I never bothered with the Welcome To Venice compilation from 1985. Back when Double Cross used to do polls, they put one up, asking readers to vote for their favorite band on the Venice comp. I'd never heard the record, but I still threw my vote in for Excel. Months went by, and I kept thinking about this compilation, curious as to what Suicidal song was on there. I finally checked it out and to my surprise, discovered it was a song I'd never heard before. That settled it. Time to download and check it out. Oh hell yeah, every single band on here is a blast to listen to. I'd never heard Beowulf before, but soon it became apparent that was I going to need to grab their first album as well. 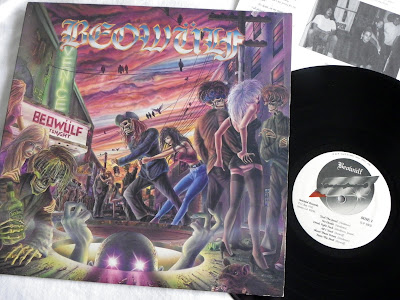 I watch a ton of stuff on eBay...a lot of which, I don't really intend to bid on. I'll add a record to the watch list just to see what happens with the auction...holding out a little bit of hope that maybe I'll be the only one watching it, and I'll be lucky enough to score it for cheap. Most often times it doesn't work out like that, but every once in a while the stars will all align, and things will fall in my favor. 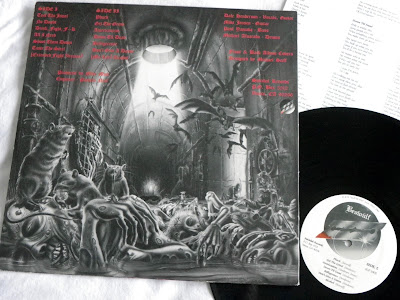 Checking popsike, it looks as though the first Beowulf album goes for $50 to $80. While I like the album, I don't know if I $80 like it. Still, I'd been listening to the album non-stop for a couple of weeks, so I figured that I'd keep an eye on a recent auction. Even though I'm trying to limit my record spending these days, there was no way I was going to walk away from this $20 win.

Haha that album cover is glorious