No Doubt About Mindset

Without a doubt, the new Mindset was one of the most anticipated Hardcore albums of last year. The bad news was that the vinyl didn't finally ship until 2013. You know, typical pressing plant delays that seem to plague REACT! with most releases. Those setbacks weren't going to slow down Mindset from getting the music out though, as they made free downloads available back in October. Hardcore lives. 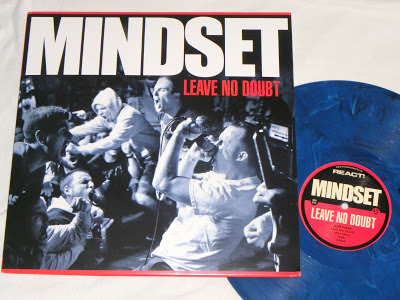 As soon as Mindset dropped the video for the song Leave No Doubt last July, you knew this album was going to be special. Seriously, how can you watch that video and not want to sing along and stagedive? Impossible. Fuck, it has been too long since I've seen these guys live. Hopefully when they get done dicking around with California and Europe, they'll get up to Massachusetts again. 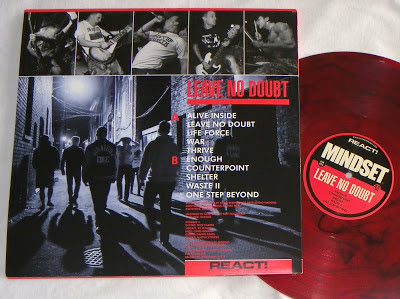 Does the album live up to all the hype? Without a doubt. Ten songs in a little over 18 minutes. This is as close to Hardcore perfection as you can get. An album full of anthems that say something and make you want to move. Modern day classic. 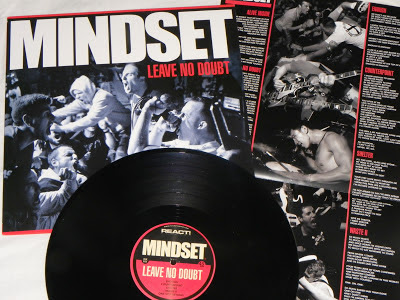 Mindset singer, Ev, handles the design work for the LP, and he did a great job. Man, the photos, the colors, the layout...top notch. 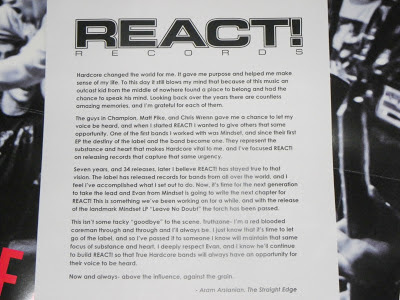 With the release of Leave No Doubt, Aram has handed the reigns of REACT! over to Ev of Mindset. Thanks for all you've done with the label, Aram. Looking forward for what's to come.

I heard they had some secret squirrel colors or something released at record stores in Boston, I figured you'd have one of those! I won't be surprised a year from now if you have all the colors/tests and all that shit!

Haha I've just posted this record up too and I've given it the same title. Looks like I copied you now, damn!

I ordered within seconds of pre-orders laucning and I got a red copy, kind of a bummer cause the blue looks great. Plus Hellfish have no idea how to pack records and mine has a mangled jacket.

At least the record sounds fantastic, can't wait to finally see these guys in May.

I didn't order this. Have the mp3s and love it, but I missed the pre-order announcement and then didn't want to place a late order and get some common version. Didn't help that they cranked out a couple of extra colors that you couldn't buy. Still, with so many different versions about I'm sure I'll pick one up at some point soon.

Mike, send me your address to acrossyourface408@yahoo.com. I got a special surprise for you last night!