The first record that Victory Records released was the Time For Reality 7 inch from Inner Strength. This was back in 1989. Here we are in 2013, and I'm hearing it for the first time. 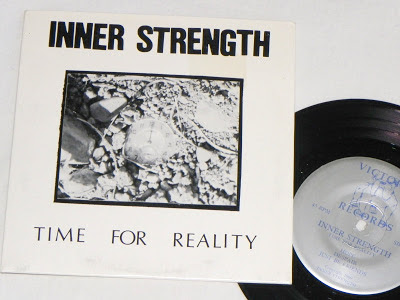 I don't know why I never bothered with this record. Getting into Hardcore back in early 90's, and loving the Worlds Collide, Billingsgate, and the Only The Strong comp from Victory, you would have thought that I would have been all over this Inner Strength record. For whatever reason, it just never happened, and as time marched forward it was forgotten about.

When I was looking over the records that Jeff from Bottled Up had available on eBay a month ago, mixed in amongst the super rare pressings from Have Heart, The First Step, and Outlast, was this copy of the Inner Strength record. I figured that if I had a chance to grab it for cheap, I'd take it. No surprise, but I was the only one interested, and won it with one bid. 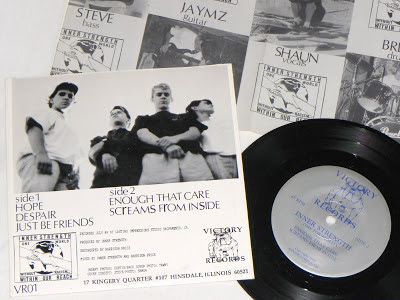 Listening to this today, I probably overlooked it back in the early 90's because I'd possibly read some reviews, and to be honest, this record isn't nearly as strong as the next few Victory releases. I still enjoy the record, but it isn't anything to lose your mind over...still, it is a fun listen when you are in a mood for some late 80's/early 90's hardcore. Queue this up next to Walk Proud, and you'll be all set.

Fuck, somehow I don't own this.

Are you sure? Maybe you do own it, and just forgot that did.

That did cross my mind, but when I saw the pic on this post I just thought to myself "I honestly don't think I have ever seen that record cover before". The only version I had seen was the second press in the other sleeve. Then I thought to myself that I had no memory of owning that cover with a color record. So I checked my record list, then my 7" box and then I hit up google. Back in the 90s I used to collect Victory color vinyl and I think somewhere along the line I got mixed up between Inner Strength and Insight, as both are early Victory releases and begin with an 'I'. So now I'm pissed at myself for never owning this record. I also discovered that there is an orange vinyl pressing of this one in this sleeve. So that's the one I want. But damn, funny how I'm still finding out new stuff after all these years...

I'm the dude on the left in the photo, played bass.

Nice write up. Those were fun days.

We were all in high school at the time so that might explain the musical prowess.