I won't buy tapes. Nope, I just won't do it. As much as I liked the Better Times 2011 demo, I wasn't going to buy the cassette release. If that was how they wanted to release it, I was satisfied with just the mp3s. 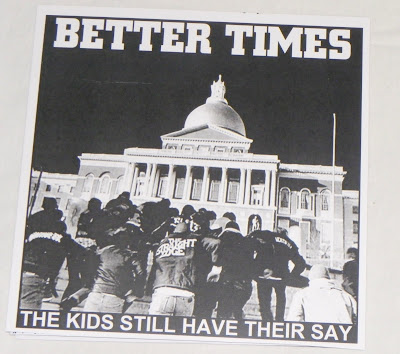 Thankfully, Press Gang eventually came through with a vinyl pressing. 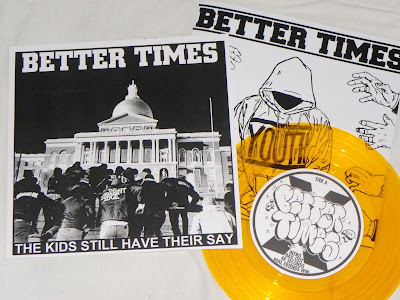 The preorder version for this 7 inch comes wrapped with a nice looking rip off of SSD's The Kids Will Have Their Say. The Better Times demo has a song called The Kids Still Have Their Say, so the SSD album cover is a nice touch. Looking good. 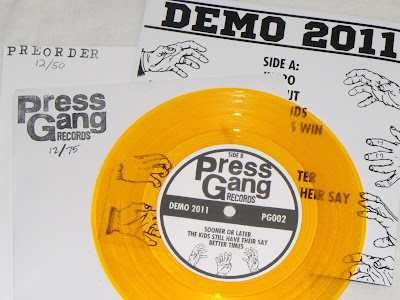 Gold vinyl was limited to 75, with only 50 of them getting the preorder SSD rip off cover.

Thanks for the heads up on the seven inch. Hopefully I'll get a SSD rip off cover.

Mike, that picture made me feel so unsettled. A complete rip off that makes me believe this band won't offer any new ideas, sound or style. I feel as if my childhood memories are being raped by kids who weren't even born at the time.

It's one thing to wear your influences on your sleeve. Completely ripping them off is another thing all together.

James, this is straight ahead, barebones, youth crew Hardcore. I don't want them to offer anything new. I just want them to play with sincerity. I'm just happy that there are kids out there that still feel as strongly and as passionately about this style of music and ideals that I fell in love with 20 odd years ago, and they care enough to carry the torch and not let it die. I don't see it as a rip off, but that's just me. I love 70's Hard Rock and 80's Thrash as well, and feel the same way...I don't want a band to evolve that style and sound...no...I want bands that remain true to what I know and love.

As far as I know, there were only 50 SSD covers in total and they were used on both gold and black vinyl. I love this band so much, it's about time they start getting reconginition.

James, I see rip offs like this as a sign of respect to those that paved the way for them. I appreciate young bands that respect their history. Especially since it is their limited sleeve, and not their standard pressing sleeve.