In 2006, Verse released one my favorite albums of the year with From Anger And Rage. It was my mission to collect every pressing for that record...in fact, I think I tried to buy every pressing for most of the records that I bought at that time. It ain't 2006 anymore. I'm trying to be a bit more selective on which bands I collect vinyl for, and after failing to really ignite me with Aggression in 2008, I basically walked away from actively trying to collect Verse vinyl. It's not that Aggression was bad...it still maintained some passion and intensity...but something was just missing, and it never got it's hooks in me. 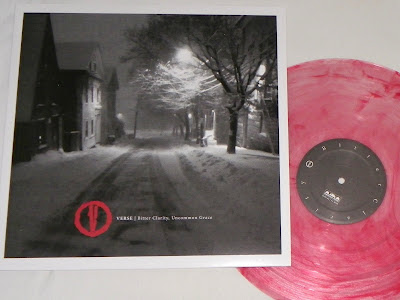 Verse proceeded to break edge and break up...although not necessarily in that order. In any case, when it was announced that they were back together and recording a new album for 2012, I struggled to show any interest. Bands that go away and then come back, rarely maintain any of magic that made them so good the first time around. Still, it was Verse, and based on the strength of those first two albums, I figured that I owed it to them to at least give the new record a listen.

While I find Bitter Clarity, Uncommon Grace to be a bit better than Aggression, they certainly haven't strayed too far from where they left us four years ago. They are still some intense motherfuckers, and there is no doubt that they pour every ounce of emotion into these songs. Lyrically, this is some serious shit, and Verse still can create a rally cry for those looking to change the world around them. Impressive on all fronts, but I still hang on to From Anger and Rage and Rebuild, and think, "yeah, but it is nowhere as good as those first albums". So while I do like Bitter Clarity, maybe it just needs to marinate in my playlists, and it will improve as I become more comfortable with it...or maybe it will be like Have Heart's Songs To Scream At The Sun, and forever be in the shadow of those that came before it. 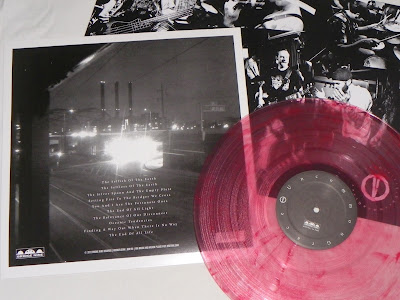 As typical with Bridge Nine releases, the packaging is outstanding. I love the look of the clear with red smoke vinyl. In buying only one copy of this LP, I'm glad that I went with this color.

I only have the first 7". I didn't think much of it so I never listened to anything else.

That is crazy talk. That's like missing out on Promises Kept because you thought Come Out Swinging was just okay.

I don't think it's crazy. I mean, if you buy a record by a band and don't really like it much, why would you buy the next one?

Do you have the first 7" by the way? I'd probably let mine go if you want it. I think I have some limited color of it or something.

I'm just saying that Verse had a lot of hype in 2005 and 2006 with those Rivalry LPs, and I would have thought that you might have been curious to download something to see how the band had progressed.

With Champion, I initially didn't think too much of Come Out Swinging, but the hype from Bridge Nine and the scene pushed me to stick with them and listen to the flawless Promises Kept LP.

For Verse, yeah, I think I have one copy of the 7 inch...it is probably listed on the blog somewhere...but it isn't a record that I'd go out of my way for right now. If I had the extra cash, I may think about it, but not now.