I grew up on Old School 80's Thrash. As an awkward and insecure teenager, this music was my safe haven all through High School. I didn't feel like I really fit in anywhere...I wasn't overly intelligent, I didn't play sports, I didn't drink...the only place that I felt at home was when I had an album spinning, and I was banging my head along to Exodus, Slayer, and Metallica. Because of this, I have a strong affinity towards this type of music, and the bands of that time. When those old 80's bands stay true to their sound, and release a new album, I'm at the front of the line to buy a copy. 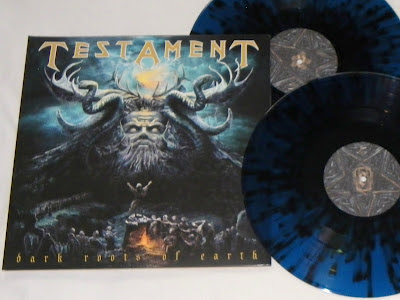 I was very happy with the new Overkill album this year, and figured that it was going to take the top spot in my Best of 2012 list. With the release of the new Testament album, though, I'm having second thoughts. While I enjoyed Testament's last album, The Formation of Damnation, the new one, Dark Roots of Earth, really brings me back to the days of Practice What You Preach and Souls of Black. I can't get over how great this album is. 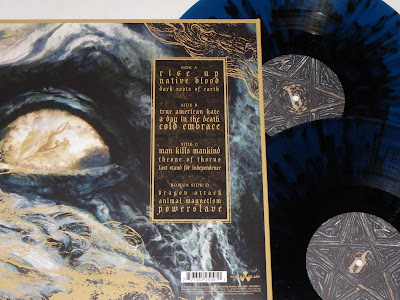 I'm going to see Testament in a few weeks, along with Anthrax and Death Angel. Dark Roots of Earth is such a strong album, I'm hoping that the band puts 4 or 5 of these new songs into their live set. You can bet that I'll be up front and thrashing along, just as I did back in '89. 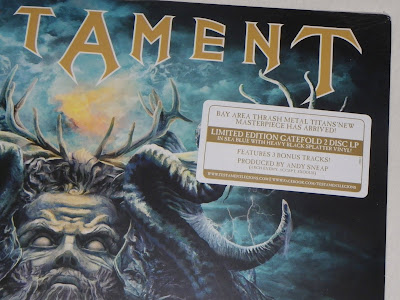 Nuclear Blast loves their colored vinyl, and gave us 6 different pressings for Dark Roots of Earth. It felt good to not have to order from overseas, and I was able to grab the blue with black splatter colored vinyl from the US webstore.