Fist Fight In The Parking Lot!

I've got a warped sense of humor, and I love a good joke. What I don't like, is humor in my music. Maybe I'm uptight about it, but I just don't care for it to fuck around. When Saturday Night Live aired a skit back in 2010 about a guy "getting the band back together" for his daughter's wedding, and then proceeding to destroy the place while raging through one of their old punk tunes...surprisingly, I loved it. 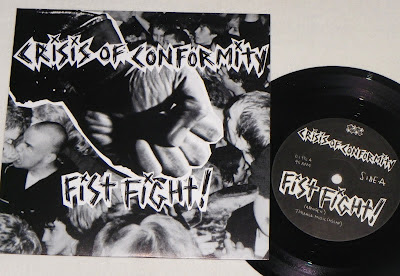 A month or so ago, I was killing some time at my local Bull Moose Music store and flipping through the 7 inch vinyl section. I didn't really expect to find anything, but I was surprised to find a record from a band called Crisis Of Conformity. Hey, this was that Saturday Night Live parody punk band. I wasn't finding anything else that caught my attention, so I decided to take a chance and pick it up. 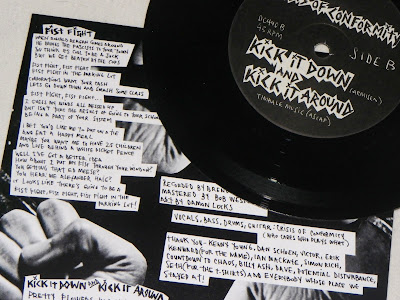 The big selling point, for me, was the song from the b side that I'd never heard before, Kick It Down And Kick It Around. I've read that Black Flag's Gimme Gimme Gimme was the inspiration behind this song, but to me it sounds more like the Angry Samoans. Pretty solid for something that isn't very serious.

I loved that skit from SNL. I think it was on youtube for a short time, and I watched it over and over again. Funny in so many different ways. But then it got taken off youtube, and the clip on the SNL website was blocked to overseas people. Wish I could watch it again. Not sure it would be as cool without the video though, I have to say.

Damn I want to see that video! Great post/story!

Mike said...
This comment has been removed by the author.
6:41 PM

You can probably watch it here.