Made In Great Britan

Early 2018, I started to really get interested in some of the more obscure New Wave Of British Heavy Metal singles. I downloaded a bunch of them on Soulseek, and I was getting down with just about everything that I was hearing. No surprise, I wanted to hunt them all down on vinyl. Of course I couldn't just fuck around, and I dove in after a heavy hitter with the Blitzkrieg single. Dropping that much cash so quickly had me pumping the breaks, and I backed off the chase, and then my attention was drawn to less expensive obsessions. Still, I've had thoughts of those singles bouncing around in my head for the past year or so, and it felt good to get back to the game. One of the early NWOBHM singles that really hooked me was from Mythra. The band released one single back in '79/'80, and I'd never heard of them before...but goddamn, those four songs are fucking gold. This shit can hang with most of those bands that were getting attention at that time. Heavy metal rules. 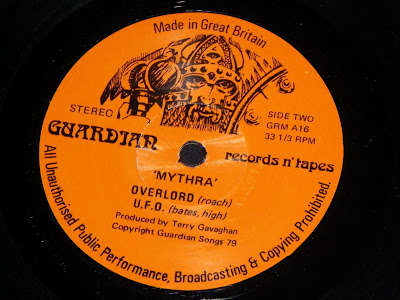 The Death & Destiny EP saw a few different pressings at the time. The original 7 inch pressing on Guardian Records N' Tapes, which was packaged in nothing but a plain white dust sleeve, and then it was reissued by Street Beat in both the 7 inch and 12 inch formats. Both of the Street Beat pressings were packaged with a picture sleeve, and I was tempted to grab one of these because they just looked better...but there was just something cool about a bare bones 7 inch single with that orange Guardian label, so that's the one that I went with. So happy to have this long lost treasure.

I've never heard of these dudes and will be seeking this out for sure. By the by, have you yet heard of/obtained the Jobcentre Rejects comps? Vol. 1 came out earlier this year I think, and Vol. 2 coming this fall. Just in case you haven't: https://jobcentrerejects.bandcamp.com/album/jobcentre-rejects