I was slightly obsessed with Jethro Tull singles earlier this year. Initially, I was interested in the exclusive songs that never appeared on the regular studio albums, but soon I became fascinated with the picture sleeves. I loved the old photos and sleeve designs...it felt like a true piece of music history. Once I started chasing them, I just wanted more and more of them, so I set a quick goal to keep going until I had nine of them...you know, for that perfect Instagram photo. Once I hit my goal, I pumped the brakes and moved on and started focusing on other records.

After picking up a few recent New Wave Of British Heavy Metal singles, it got me thinking about that obsession with Tull singles, and it rekindled that desire to collect them...so I grabbed another one from Discogs. 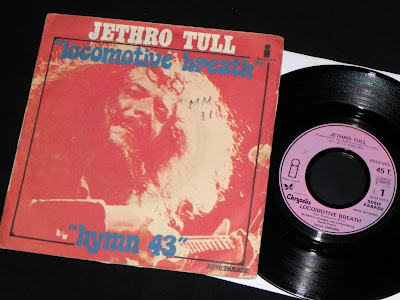 Locomotive Breath is one of my top Jethro Tull songs, so I kind of had my sights set on getting the 7 inch single for that one. As luck would have it, I found a US seller with an available copy...and since the price was right, I quickly added it to my cart.

Once again, I love that picture sleeve photo. Shame that someone felt the need to write their initials on the front and back. 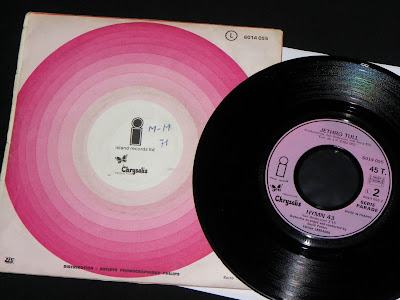 I've got a few of these French pressings from the Serie Parade collection for Tull singles, so it feels cool to add one more.