I've made some real progress with my Top 10 Wants this year...crossing some nice heavy hitters from the list. It is a nice contrast from last year, when I only picked up one. This year I'm focused, and making big moves. Once I checked off the DYS record, the floodgates opened and all restraint went out the window. Everything was fair game at that point, and I became a man on a mission.

When the end of February rolled around, and some dude bought almost $200 worth of records from my Discogs store, I knew that the time was right to turn around and roll that money back into another big record from my 2017 Want List. 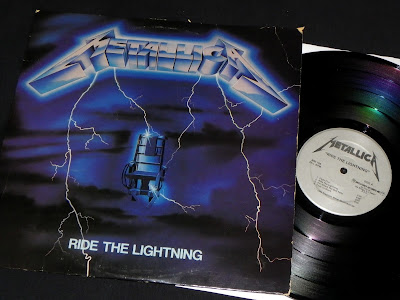 I've lost some focus on my Megaforce silver label collection lately. I've just been pulled in other directions, and knowing that a big ticket item like Ride The Lightning was on there, kind of made it a bit intimidating to stick with. After getting sidetracked for a couple of years, it feels pretty damn good to add another silver label to the collection.

Who knows, maybe this will get moving on some of the other ones that I'm currently missing. If not, I might have to just add them to the Top Wants of 2018 list for motivation. 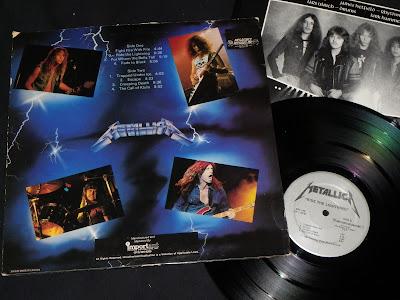 Because Metallica were picked up by Elektra shortly after the release of Ride The Lightning, only a limited amount were pressed by Megaforce Records. While the silver label Megaforce pressing isn't rare by any stretch, given the popularity of the album, they still command a serious price tag. 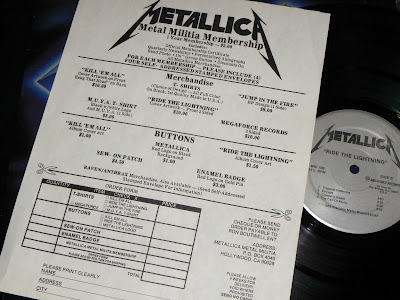 While on the hunt for the perfect copy, once I saw one listed on Discogs with the Metal Militia membership form, I knew that I had to grab it, even with the higher than normal price tag.

One of the coolest part of the original first Megaforce press is the "For Whom the Bells Toll" misspelling.
Great pick up!

That misspelling has me all messed up, and I can never remember if is "Bells Toll" or "Bell Tolls".