Steppin' On A Landmine

I picked up this Tank 7 inch back in January this year. I was hot on those early 80's 7 inches from Metal bands at the time, and grabbed this Tank record when I was grabbing a few Raven singles. At the time, my plan was to buy a copy of Tank's Filth Hounds Of Hades LP, and combine it with this single for one post here on the blog. Here we are, ten months later, and I still haven't made a move on that LP...and since only have a couple records sitting here to write about right now, we might as well get this one out of the way and officially add it to the collection. 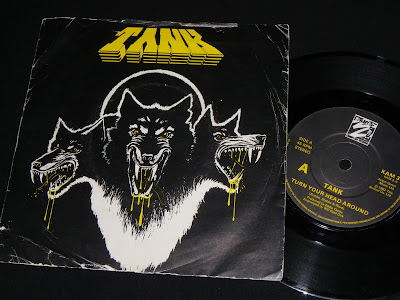 When I received this record, I was initially a bit put off by the condition of the sleeve. I like my stuff in the best condition, and seeing this sleeve all beat up was a big disappointment. However, the more that I thought about it, I figured that the wear and tear gave this record some character. This single saw some action. In the middle of the legendary days of the New Wave Of British Heavy Metal, this piece of vinyl was right in the middle of things, mixing it up and throwing punches. Fuck that pretentious record collector shit, this single was bouncing from turntable to turntable, passed between mates in their London flats, as they practiced with their scrappy little NWOBHM cover band, with dreams of sharing a stage with Motorhead one day. 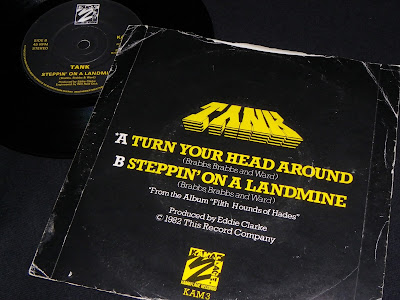 Well, that's how this record's history played out in my head.

You are right. Wise words! Each of its own, what beat down copies have is character, whereas they may have a lower financial value. So it´s character vs. value, ehh?