At the start of each year I make a half-assed mental Want List. Nothing really set in stone...just a list of a few records that I have the best of intentions of making a run at over the course of the year. Most of the time, these efforts don't amount to much, and an original pressing of Reign In Blood has been near the top of that list year after year. 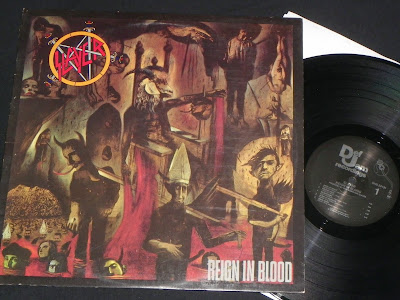 I originally bought this on cassette back when it was released in 1986. I remember getting home, popping it into the tape deck on my stereo, and giving it my first listen. It was so fast...so brutal...so evil. I loved it, and was little scared of it at the same time. By the time the thunder crashed, and the sound of rain started to close out Raining Blood, I was feeling nauseous and had to crash on my bed to rest my head. I ended up coming down with the flu and spent the night vomiting. A few friends at school had cautioned me about listening to this kind of satanic metal...they knew people that knew people, and had heard stories about kids that had some serious shit happen to them, that was in some way most likely related to the music they chose to listen to...and as I lay in bead sweating out my sickness, a part of me wondered if maybe they were right.

But this album was so good, and once I had my strength back,I had to give it another try. This time there were no ill side effects...this time through the album, I had my new favorite band. 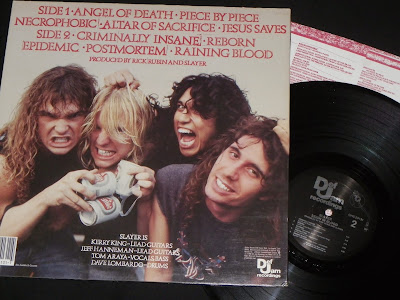 While I've owned Reign In Blood on both cassette and CD over the years, I've never owned it on vinyl...well, with the exception of my copy that came with the Vinyl Conflict box set. Still, that one didn't really count, as I needed an original Def Jam pressing. Week after week, month after month, I watched them come and go on eBay. Either they went for more than I wanted to commit to, or they were beat to shit. When I'm buying an original pressing, it needs to be in great condition, and not look like it been kicked around some kid's dirty floor and left to soak in a puddle of beer.

Last month, one popped up on eBay that looked to be in good shape, and it had a Buy It Now price with the option to Make An Offer. The time was right for me to make my move. My offer was made and accepted. Finally! I own the vinyl for one of the best metal albums of all time. Praise, hail Satan.

I love how in 2014 slayer couldn't look less satanic or threatening on the back cover. Back in the day though these guys were terrifying and obviously dabbled in the dark arts to give you that bout of sickness Mike.