Early last year, I'd heard good things about a new Thrash band out of Norway called Tantara. Since I'm always up for checking out some good Thrash, I found a download for their newest album, Based On Evil. Sometimes though, there are times when I just have too much new music to check out, and some albums don't get the attention they deserve. Such was the case with Tantara. 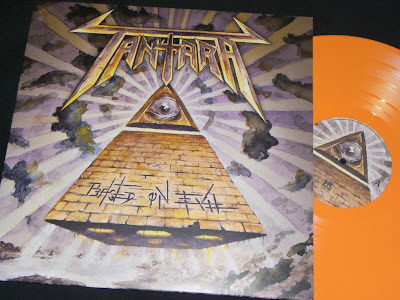 After downloading the album, I gave it a quick listen. Yeah, it was okay, but it didn't immediately grab me, so I moved on to one of the ten other new albums that I'd added to my iPod.

By the end of 2013, I was checking out some of the new music I'd added to the iPod over the past year, and in checking out Tantara's Based On Evil album, I was suddenly floored by how great it was. Funny how sometimes music just clicks like that. Since I like to own a physical copy, and not just download albums for my iPod, I had to hunt down the vinyl. I was placing an order with Nuclear Blast Germany at the end of the year, and decided that it was finally time to grab a copy of this LP. Awesome Bay Area influenced Thrash.