Chilmark were a hardcore band out of Cape Cod, Massachusetts back in the early 90's. They play that heavy emo style that was popular at the time, and became one of the defining sounds from those days. 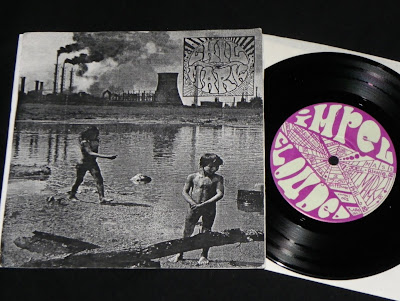 Around '94, or so, I picked up some Chilmark records from a distro table at one of the shows I had traveled to in Massachusetts. It was basically a package deal where they must have had additional records for the Driftwood 7 inch, so they just stuck it in with the Mosaic 7 inch and packaging. I loved those two 7 inches...however, the CD EP that followed, was a bit disappointing. Still, it was good deal at the time, but it always kind of bothered me to just have that loose Driftwood record with no cover.

I was recently looking at Discogs to see what was available for Chilmark, and noticed that there was a seller offering a limited "band cover" for the Driftwood record. It was only listed at $5, so I jumped to buy it. 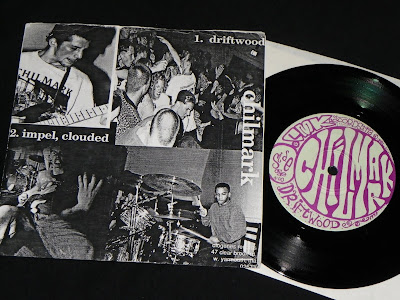 When it arrived, it was pretty obvious that it didn't match the limited pressing that it was listed as, and this is actually the regular pressing. I mean it was cheap, and I'm happy to finally have the record with the cover, so I'm not going to get too bent out of shape over it, but man, some sellers are absolutely clueless.

It's so true. Some sellers seem to have no eyes. Which is why I always, always ask for pictures.

Also, I think I used to own a Chilmark 7" on greenish color vinyl but don't have it anymore.

Yeah, I'm not going to bother asking for pictures for a $5 record. I generally judge the sellers feedback, and if they generally have a positive rating, I'll only ask for pictures if it is a high dollar item.