After reading the story of Noise Records, Damn The Machine, a couple of years ago, it dawned on me that in addition to collecting original pressings for Metal Blade, Megaforce and Combat, I needed to round out the Big 4 for 80's metal record labels, and add Noise to the list. I've slowly been adding those original Noise records to the collection, and when I was grabbing Kreator's Extreme Aggression from a German seller on Discogs, I figured that I'd check to see if he had anything else from the Noise label. 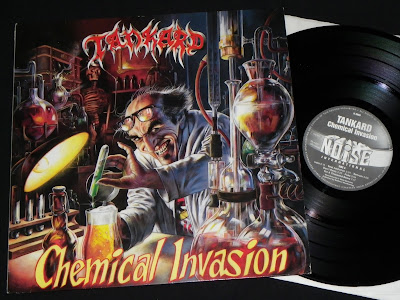 While I've got the straight edge, and find absolutely nothing appealing about drinking and beer culture, I do love thrash metal, and even though just about every song from Tankard's Chemical Invasion album is about beer and getting drunk, I still can't resist headbanging like a maniac to this record. Chemical Invasion was Tankard's second album, and back in the 80's, I loved everything from the Zombie Attack debut, straight through to the Alien EP. I lost track of Tankard by the time they released The Meaning Of Life back in 1990, so there is a large chunk of their discography that I really haven't heard. I might have to remedy that soon! 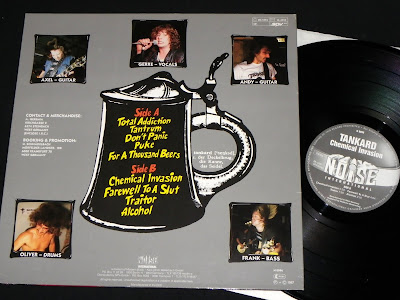 I still have a long way to go with my Noise collection, but I'm slowly getting there. Hopefully I can keep making some steady progress because the label has so many metal classics that I need to get my hands on.