Before Bruce Dickinson joined Iron Maiden late in '81, he was the man behind the mic for Samson. They were a pretty big deal in the New Wave Of British Heavy Metal scene at the time, and recorded a couple of albums with "Bruce Bruce" before he split for bigger stages with Maiden. Still those early Samson albums are a good time, and I can't believe that I still don't own them. 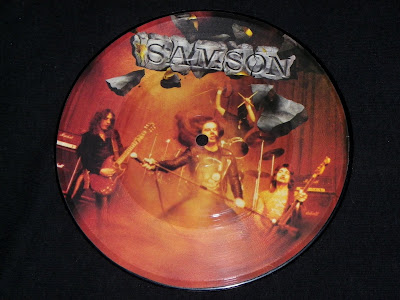 I've been obsessing over NWOBHM records a bit this year, specifically the singles from that period, and so when I saw this 7 inch for Samson, I figured that I'd it was a good time to finally add a piece of Samson vinyl to the collection. I wouldn't normally go for a picture disc, but since the regular 7 inch pressing didn't come with a picture sleeve, I guess the picture disk is the most attractive option. 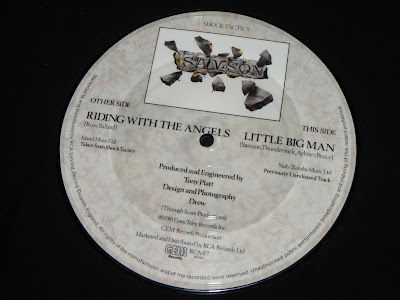 I'm all about the exclusive b-side song on singles, and Little Big Man from Samson is a killer. I'm glad that I finally found this long lost song. Now maybe I will finally get off my ass and pick up those Dickinson-era Samson albums!