I'd never heard of Stone Dagger until a few weeks ago, when Marcus happened to mention their name. He spoke of them like I should know who he was talking about. In an attempt to not look as out of touch as I felt, I quickly hunted down some info on the band. 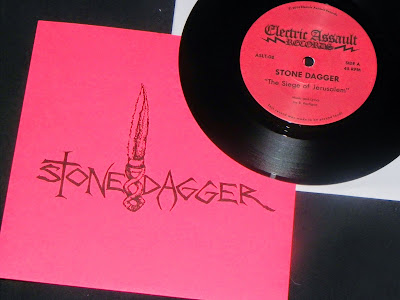 I was caught unaware when Doug tipped me off to Magic Circle, and I'll be damned if the same thing didn't happen again with Stone Dagger. How are people hearing about this shit before me?!?

Apparently Magic Circle wasn't enough Metal for one man, and Brendan Radigan grabbed a microphone and guitar to give us Stone Dagger. The promo from Electric Assault Records listed this "for fans of Dio". Goddamn...that is some pretty big talk, but hey, I'm a huge fan of Dio, and I'm loving the shit out of these two songs, so the label must know what they are talking about. 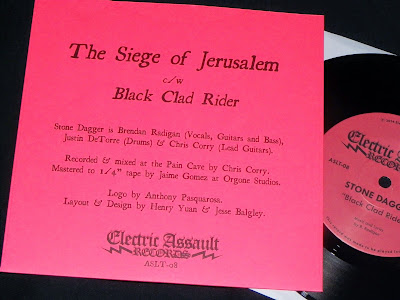 I don't know if I can include a two song 7 inch in my top Metal releases for the year, but I may not have a choice with this one. This thing is so good...please give me a follow up full length.

I enjoyed this post because it makes me sound like I'm actually in touch and up to date.