I have a long list of metal/rock stuff that I want to collect. Black Sabbath with the Vertigo swirl labels. The first few Motorhead albums on Bronze. Thin Lizzy on Vertigo. UK pressings for Budgie. But at the top of my list lately has been the original silver label Megaforce pressings. I've been obsessed with them, and most of my time on eBay lately has been spent searching for them...checking prices and weeding out those that are too badly beat up. I've come up short on a few that I've been chasing recently, but I have managed to pick up a couple of oddities from the Megaforce catalog. 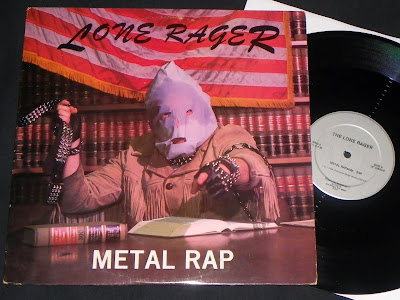 So I went to a Chain of Strength show, and the only thing I bought was a Metal Rap record. I know, it sounds like the set up to a bad joke, but it is the truth. When my brother and I went to see the Chain/Mindset show a few weeks ago, I needed to check out the metal section at Welfare Records. As soon as I saw the Lone Rager record, I knew that I was making it mine. 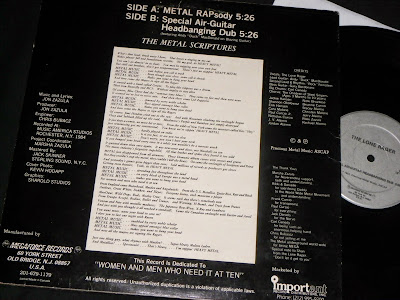 Lone Rager won't stand up against any of the Megaforce heavy hitters like Metallica, Raven, and Anthrax, but released in 1984 alongside the Whiplash and Armed & Dangerous EPs, it is still a must for a collector. Before Anthrax was doing I'm The Man and playing with Public Enemy, Johnny Z from Megaforce did this Lone Rager record...a rap tribute to metal. The front cover, with Johnny Z in a sweaty pillowcase, reminds me of either The Mentors or that hilarious Klan scene from Django Unchained...so you know this is just a fun little project, and not to be taken too seriously. 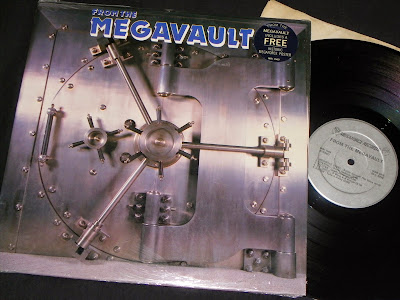 In addition to the Lone Rager 12 inch, I also recently picked up the From The Megavault compilation from eBay. 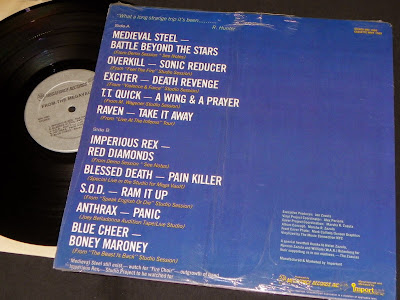 At first glance, I wasn't that excited about this comp from 1985. I already had the Overkill, S.O.D., and Anthrax songs on other formats, and figured that the other songs on here were just outtakes. This was not the case, and I was surprised to find I'd never heard the Exciter and T.T. Quick songs on here...plus the live Raven song wasn't on their Live At The Inferno LP either. Suddenly, this comp LP wasn't the throw away purchase that I'd expected. 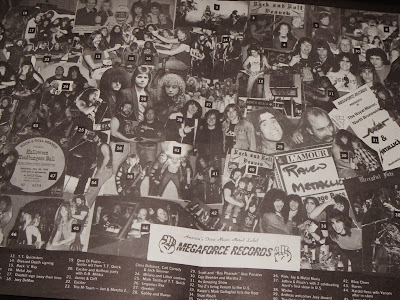 As the sticker on the front cover indicates, this album comes with a "historic" Megaforce poster. 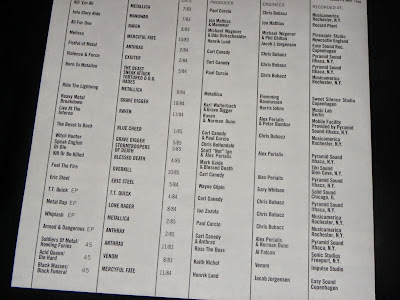 The highlight of the poster, was the back which shows all the Megaforce releases to date. A great checklist to check what I need to chase next.

Oooohh! Send me a scan of that checklist! Now that the Corroseum site has been down for a while, that would be handy!