Okay...okay...I admit it. I was way off base when I wrote about the Iron Reagan LP last year. It failed to excite me when I first heard it, and kind of wrote it off with a yawn.

By the end of year, I could not get enough of the Iron Man album, and when listening to my 2013 Playlist on my iPod, it would jump right from Iron Man to Iron Reagan, and soon I was hooked each time the Iron Reagan album would kick off with that "1..2..3..4...*riff*". By the end of the year, Iron Reagan had almost worked themselves into my Top 10. 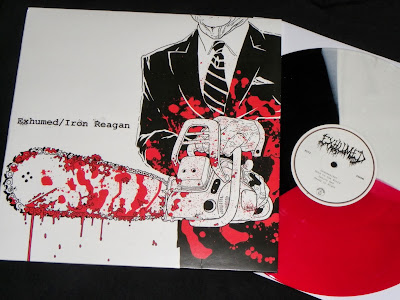 When I heard that Iron Reagan were doing a split with Exhumed, I didn't hesitate to order from Tank Crimes.

Iron Reagan deliver once again. Excellent crossover thrash. Exhumed on the other hand were new to me, and were a pleasant surprise. Pretty cool grinding and growling Metal. Four songs from them, with two of them being covers from Minor Threat and Negative Approach. Very cool. 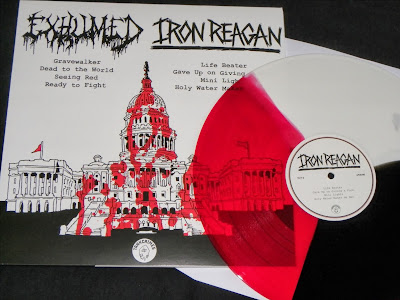 I love the look of this record. The front cover is Metal as fuck, and the red/black/white tri colored vinyl just completes the package.. 300 pressed.

be sure to check out exhumeds "anatomy is destiny" a death metal masterpiece!

Worse Than Dead is an amazing album. You fucked up son! It deserves top 10.
I didn't think it was possible, but they made Paycheck even better with the rerecording of the demo version.