I don't think I'm easily influenced, I think I just recognize a good suggestion when I hear it. 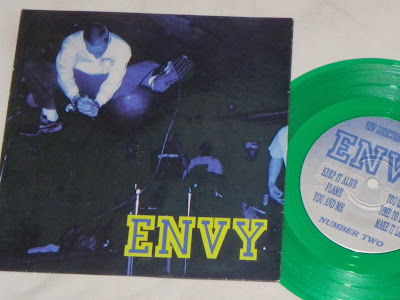 Last month, Marcus dropped me a line to let me know that there was a green vinyl Envy 7 inch on eBay. Whoa, there was a name I hadn't thought about in a while. I want to say that I picked up this 7 inch on black vinyl at a big fest in New Bedford back in '95 or so. I probably bought it because of the sick Youth Crew jump that at singer was pulling off on the front cover...very Cappo-esque. I don't really remember listening to the record all that much, as sometimes it was difficult to get me to pay attention if it wasn't on CD. Anyway, Marcus mentioned that they were hard to come by on green vinyl, so if I was interested, I should go for it. It was terrible timing, as it was just before Christmas, and I was feeling broke. Still, I threw it in my Watch List, curious as to where the auction may go. 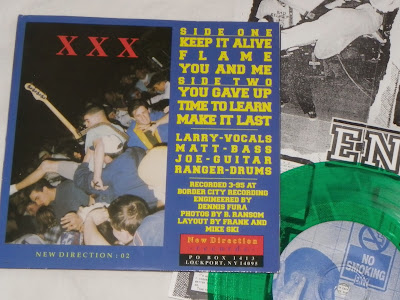 What? You think I can walk away from a $3 Straight Edge record? Come on. You know me better than that. Nobody else was interested, so I grabbed it. I think I'm liking this more today than I did 19 years ago. Great steal. Thanks for the tip, Marcus.

Awesome band, the LP is one of the best records from that era imo