Metallica released a new video recently, and it looks like we are finally getting a follow up to Death Magnetic. Eight years between albums is a fucking joke, but I'm still looking forward to it, and the new video is a nice preview.

The only downside to new Metallica is that all the haters come crawling out of the woodwork. I get it..."Metallica sold out" and "only the first three albums are true". They took your virginity and didn't call you the next day. Yeah yeah, you've got a chip on your shoulder for how badly Metallica have let you down.

I'm not delusional, and I can certainly understand why some people only need the first four...but for this guy, I can hang will all of the Metallica albums. So in the spirit of firing up the haters, I figured it was time to cross a big win off my wantlist/shitlist for this year. 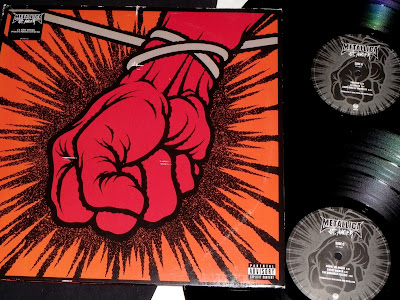 As far as the Most Hated Metallica Album goes, I'm pretty sure that St. Anger takes the crown. The recording is raw. The drums sound like shit. There are no guitar solos. It was supposed to be a return to form, but instead just sounds like the band trying to be more modern. People despise this thing with a passion, but I love these songs...and of course, because people hate it so much, it just made me want to own a copy even more. 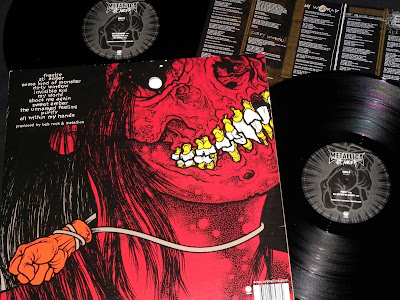 When it came time to cross this turd off my wantlist/shitlist, I figured that I'd go with the original UK pressing on Vertigo. I had no real logic behind it, other than the Vertigo name just seems cooler than Elektra. Of course, now that I own an original pressing of St. Anger, but still don't own Ride The Lightning or Master Of Puppets, just shows how misguided and retarded I am.

Hate this album, but the Pushead artwork is awesome. Such a waste of good art.

I actually want this now. Just for the pushead artwork.