Taste Of The Vinyl Dead

Back in 2008, I became obsessed with Night Of The Vinyl Dead Records. The label specialized in vinyl pressings for records that had never been released on wax, and within five months, I scratched five of them from my Want List. I was rollin', but since they are pressed in very limited numbers, and I had to order them all with high shipping prices from overseas, I quickly became burned out on spending the money needed to try and chase these. I bailed on the game, and instead I focused on things that I thought was more important at the time...like wasting my money on more Have Heart 7 inches. 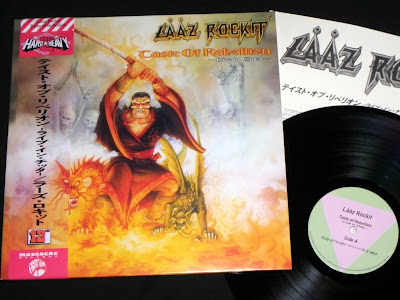 After picking up the first Laaz Rockit LP at the end of 2014, I suddenly couldn't get enough of the band, and soon after found myself downloading their second LP, No Stranger To Danger. Those two records quickly dominated my playlists over the summer, and it got me thinking more and more about checking out some of their other stuff that I'd never heard before. While I grew up with Know Your Enemy and Annihilation Principle, I never bothered with anything that came out after '89. Feeling adventurous for some new Laaz Rockit, I dove headfirst into their live LP from 1992, Taste Of Rebellion - Live In Citta. I figured that if a live album full of latter day Laaz Rockit couldn't sell me on these songs that I'd never heard, nothing could. 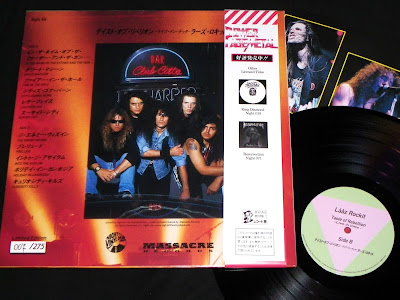 Wow. This is some great shit. Live metal in '92...I had no idea that this style was still going this strong. Nirvana might have been blowing up at the time, but no one told Laaz Rockit as they were still bringing some great, straight forward Heavy Metal. 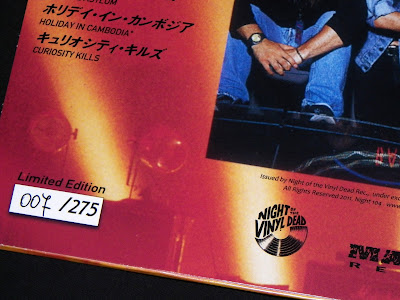 After falling in love with this live LP, I remembered that Night Of The Vinyl Dead did a pressing of it, and suddenly I was back on the NOTVD hunt. Of course I had to buy it from overseas, which meant that the shipping cost almost as much as the record itself, but I didn't care...I needed this. Another quality vinyl release from NOTVD...hand numbered and limited to 275...plus, since the album was recorded in Japan, the album cover comes wrapped in a cool looking OBI strip. Well done.