We're Still Not In This Alone 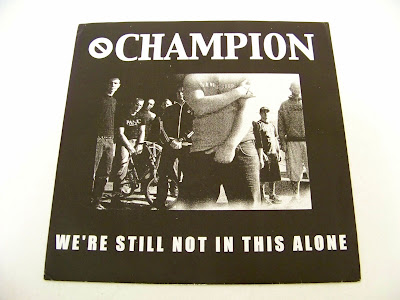 I've been trying to acquire this record for a few years now. One of the few Champion records that I did not have in my collection...the Count Our Number record release pressing with the Youth of Today ripoff cover. Each time I would try for it on eBay in the past, and it doesn't show up often, the price was always too rich for my blood. Last week, everything fell in to place to make it possible for me to buy this rare record. First of all, I had some money sitting in my Paypal account after selling some records for Rob...by coincidence some of them happened to be Champion records. Then I notice that Words of War Records has posted on a messageboard that they have put up some records for auction, including a bunch of Champion stuff. I check it out and find the Count Our Numbers record release is up for bid. With the extra cash in my account, I knew immediately that I would be winning this record. At the time, it ended up being the most money that I've ever spent on a single record, but then it would only take a couple of days for me to exceed that amount. More on that in a future post. 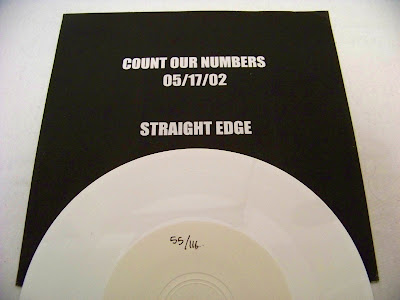 Hand numbered 55 of 116, on white vinyl. Champion were the band that got me interested in collecting records so I can't express how much it means to me to finally have this in my collection. 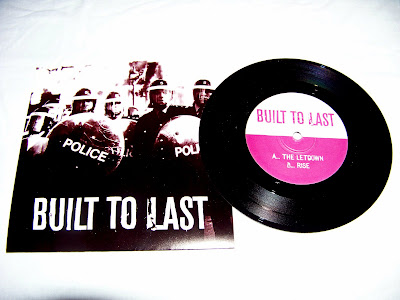 Words Of War Records shipped the vinyl in record time (no pun intended). I couldn't believe how fast it arrived. They also included a Built To Last 7 inch with the Champion one that I won. I had never heard this band, and would have probably never given them a chance had they not included this as a bonus. Apparently Built To Last have been around for a while and this is their first record in 7 years, but I've never heard them before. I've only listened to this a few times, but I'm really liking it. The vocals seem very familiar, but I can't place them right now...maybe they sound like The Nerve Agents, I'm not sure. Either way it was nice to get a bonus 7 inch that didn't turn out to be a waste of plastic. Limited to 269 on black vinyl.

I'm intrigued as to what you spent more on than this.

hey, do you know what exactly is this version of the record which i own - http://img26.imageshack.us/img26/9769/testornot.jpg

regarding the pressing info - http://www.wordsofwarrecords.com/ww/releases.htm - i can not recognize my record..

I'm not very familiar with Words of War pressing info, but I don't see your copy on the list.