Inbred and Under Appreciated 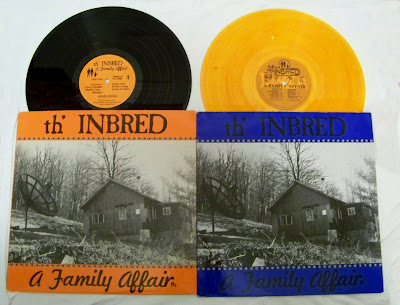 Do you have one of those bands that you just lose your mind over, but no one else seems to know them? A band that you think should have been huge, but for some reason history has swept them under the rug. A band that you think that everyone should be exposed to...and you know that if people just gave this band a chance, you know that they would love them as well. For me that band is Th' Inbred. I got turned on to this hardcore punk band around 1988 or so. I can't remember how this tape ended up in the hands of my brother. The cassette, Family Pack, held both of the band's albums and we both fell in love with the quirky hardcore punk style. There is a strong Dead Kennedy's influence here with the sarcastic styling of lyrics and the odd song structures. This small band out of West Virginia was so far ahead of their time in their critique of hardcore and scene politics...a lot of this stuff is still valid today. The lyrics really set a foundation for me, before I even fully understood the whole punk/hardcore mentality of thinking for yourself and not following the company line. With songs like Jesus Youth/Satan Youth that takes a stab at both Christian religion ("do another hit of this Jesus, man, and you'll never have worry about your free will again") and Satanism ("a black sheep by any other name is still a sheep"), Fool's Paradise ("I'm going to get so fucked up, I can't see how bad they're fuckin' me"), and The Positive Song which blasts the generic, blind positivity in hardcore ("if everyone skates a lot and goes to a lot of shows, everything's going to turn out alright, okay?"). Absolute punk genius.
I've had original copies of the bands two albums, A Family Affair (1986) and Kissin' Cousins (1988), for while now. I was surfin' around on eBay, checking out some Youth of Today records, when I stumbled across a seller that also had the 1989 re-issue of A Family Affair up for auction. I'm not too familiar with the pressing info for Th' Inbred, but I had no idea that this album was re-issued, and on orange colored vinyl no less! I knew immediately that I NEEDED this pressing for my collection, and I set a maximum bid to insure that I won it. Maybe not the smartest move since I saw another copy of the album sell for around $10 on eBay a week later, but hey, this was still worth every penny that I spent on it.
In the photo above, I included both the original pressing on black vinyl with the orange cover, next to the repressing on orange vinyl with the blue cover...because I think the album is that cool. Ha! Anyway, you need to hear this album, and since it isn't in press anymore, you can download it here. Maybe I've got too much nostalgia wrapped up in this, but I hope you enjoy it as much as I do.
Posted by Mike at 9:44 PM

Walk the plank, SSS and other rare UKHC stuff for sale.

Get in touch if you have any questions

Sweet SSS demo, but I've already bought 2 big ticket items this month, and I've got to shut down my spending for a few weeks.

Still worth watching as it may not go for that much?

Damn I still want the shirt with that Champion design.