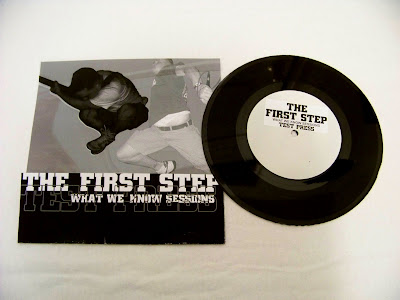 What could possibly entice me to spend more money this month...and only days after a huge win with the Champion Count Our Numbers record release. Exceeding the money that I spent on the Champion 7 inch, I managed to get my hands on a test pressing of The First Step's What We Know Sessions. To fund the releasing of this record, in addition to the upcoming re-release of the Right Idea EP, Bottled Up Records put up some vinyl on eBay...this test press was one of those items. I threw a bid on it at the last minute, but in the end I didn't win it. My bid was reasonable enough so I was hopeful that Bottled Up would look to unload more than just the one they had up for sale, and make me a Second Chance Offer...and the next day I got one. Damn, after the money that I had already spent on the Champion record, I had no business entertaining the idea of buying this record. However, if I didn't do it now, I may never get the chance again. Bottled Up test presses are limited to 13, so I bit the bullet and accepted the offer. Other than the Said and Done test press, that Shield Records gave to me, this was the first test press that I have purchased. I've never really been interested in collecting them, because the prices are typically ridiculous, but fuck it, it felt so good to buy this one. The cover that Bottled Up did for this release is pretty unique. It includes a clear plastic overlay with the image of Aaron Chrietzberg airborne with his guitar, which rests nicely over the paper cover photo of Stephen St. Germain. Very cool. Jeff, from Bottled Up, let me know that he finally just got the artwork for the regular press, and they should be ready to ship in about two weeks. I've got two copies of that one coming as well, which will be nice to add to the collection. 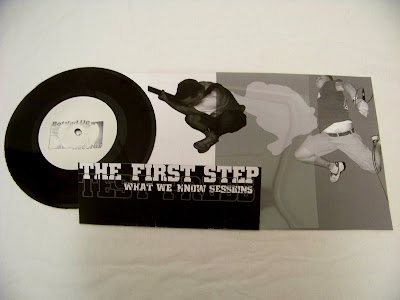 The thing does look awesome.

But what is the difference between this record and What We Know?

From Jeff at Bottled Up, "these are different versions that were written and recorded when the band broke up in 2003. They were recorded in December 2003 before the band was back together."

Man, I feel personally responsible for this. First I'm turning you on to eBay, next you're dropping big money on tests. Where is it all gonna end? With an empty bank account and a starving family if you're not careful!

Thanks for the info Mike!