After trading a couple of records in Boston Common, Marcus was looking forward to checking out the Armageddon Shop in Harvard Square. I was happy to oblige, and we grabbed a ride through Uber and were there in no time.

Having visited the Armageddon Shop a few months earlier with Sandwell, I was curious if the store would have anything interesting available this time around. I mean, it is a cool store, but they mostly carried new releases and reissues, and there wasn't a huge selection of used records. Surprisingly, I walked out of there with more records than I expected. 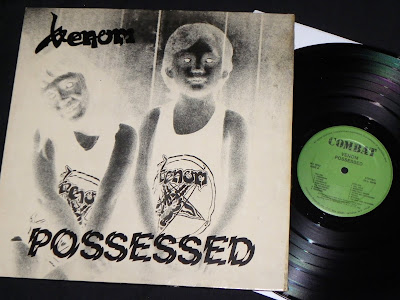 The first record that I pulled from the bins was Venom's Possessed album. This record takes a pretty solid drop in quality from the first three Venom records, but there are still some great song here, and Possessed marks the end of band's classic period. 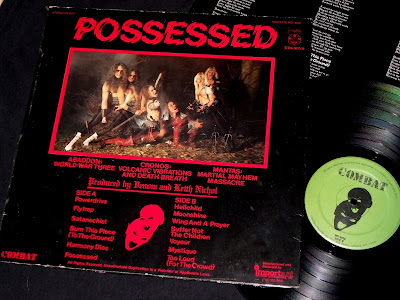 I already owned the Earmark reissue from 2002...which I'd picked up early in my record collecting career, but it was not really cutting it for me anymore, and I was hoping to replace it with an original UK Neat pressing at some point. While this copy isn't on the Neat label, as soon as I pulled the vinyl from the sleeve and saw the green Combat labels, I knew I was going to have to buy it, and with a $15 price tag, it was an easy purchase.