When you are paying the ridiculous shipping prices from Rise Above, you might as well go all in and buy one of everything while you are shopping in their webstore. Finished off my recent shopping spree with two new 7 inches.

Rise Above actually had these two records posted in their webstore a while ago, but since they were unavailable to purchase, I assumed that I'd missed the preorder, and they had sold out. While I was picking up the new Blood Ceremony and Beastmaker albums, I figured that I'd check again, and was surprised to find they were available. I didn't hesitate to add them to the cart before checking out. 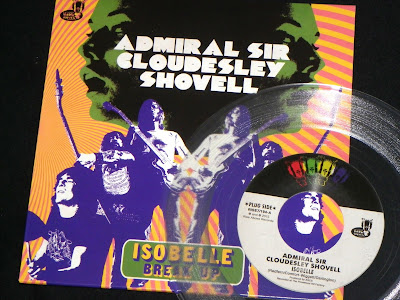 I've always enjoyed Admiral Sir Cloudesley Shovell, so I was looking forward to this latest two song single. No need to hunt for a preview song to check it out first...this was an automatic buy.

Two songs in that same rowdy rock n roll vein that the Shovell do best.

150 pressed on crystal clear vinyl. I love those labels with the rainbow Rise Above logo. Looking good. 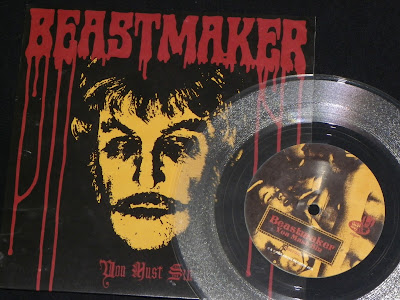 Unlike the Admiral Sir Cloudesley Shovell record, the Beastmaker record doesn't offer anything new. I believe these were just two songs taken off the band's self released demo, but they both ended up on the album, so after a couple of spins, I'll probably just be shelving this one.

Still, I'm not going to turn my back at a Rise Above clear vinyl pressing. 150 pressed.