Year Of The Bat

Back in 2013, Bat released their Primitive Age demo. Man, that thing was so wrapped up in Venom worship, I fell in love with it immediately. Now in 2015, the band are set to release a new 7 inch, and record a full length album, so it was the perfect time to finally get those demo songs pressed on vinyl. 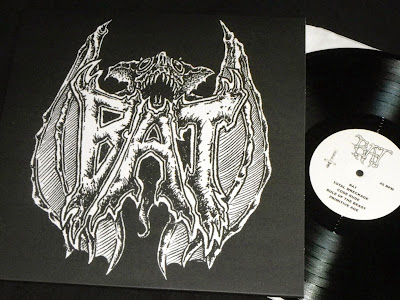 Hells Headbangers had the Primitive Age 12 inch listed in their store as Out Of Stock for weeks before they were made available. There were only 111 pressed on white vinyl, and I was in that store checking everyday until they were available to buy. As soon as I saw the vinyl was available, I added the white vinyl to my cart. Victory! My determination paid off, and I scored the most limited pressing...or so I thought. A couple of days later, Hells Headbangers sends me an email that basically says, "Whoops, sorry...the white vinyl isn't available any longer. Are you okay with black vinyl?". Damn it. No, it isn't okay, but what other option do I have? I'll take the black vinyl. 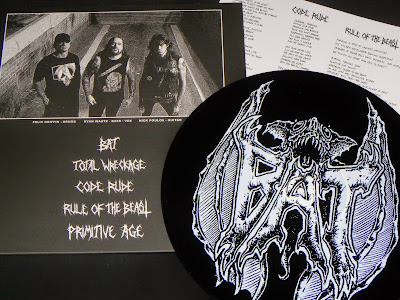 The b-side of this record is screened with the Bat logo. Damn, that thing looks good! Comparing it to the white vinyl, I have to say that I prefer the look of the black vinyl with the white silk screened art. I'm glad that things worked out this way...but damn it, I better get the red vinyl for the new Bat single that is due to drop any day!