It was probably about 9 or 10 years ago, when I first started going to my friend Jeff's house, and checking out his record collection. Up until that point, I'd only been familiar with the Combat Records pressing of the Sirens album from Savatage...yeah, the one with the little kids creeping towards you brandishing weapons. When Jeff pulled out the first pressing on Par Records with the blue cover, my jaw hit the floor. What was this?!? 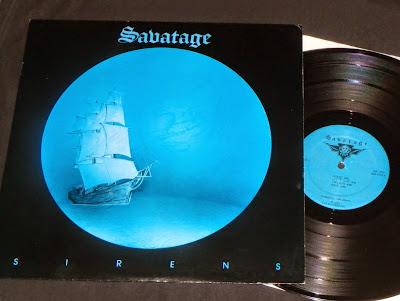 I desperately wanted a copy, but when I checked the regular going rate on eBay, I was immediately dismayed as the price was way to rich for my blood. At the time, I had no idea that there was a market for Metal vinyl, and was surprised to find that the record was typically selling around the $100 dollar mark, and if you wanted the colored vinyl press, you could expect to pay three times that. Disappointed, I resigned to the fact that it was unlikely that I was ever going to own a Par Records pressing. 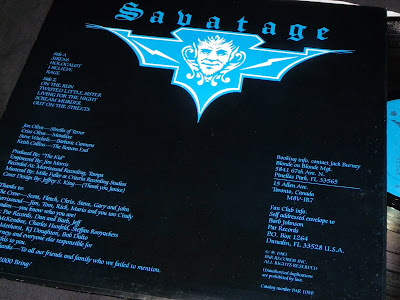 Fast forward to this month, and while I did a decent job at limiting my spending for the past month or so, I quickly lost control once the Christmas and New Year holidays were behind us. It started with a couple of really cheap records, and it just snowballed from there. When I found the Sirens LP on eBay with a reasonable starting price, I couldn't resist the urge to throw in a bid. Everyone else had their eyes on another copy of the album that was listed at a lower starting price from a different seller, and I ended up winning with the only bid...and while I still paid a very fair price for mine, that other recorded ended in a bidding war and sold for a higher price. Good deal.