I never really set out to collect Raven. The albums were obviously essential, but the early singles were never on my radar. When I bought the Crash Bang Wallop 12 inch, all that changed. 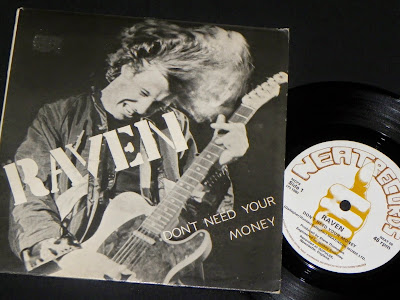 I was first made aware of Raven's first 7 inch, Don't Need Your Money, through the Living Fast debut, where Ryan Waste interviews John Gallagher. During their conversation, they mention these early recordings, and Ryan flashes a copy of the record cover. I'd never done any homework on the early Raven vinyl releases, and this was the first time I'd known this record existed. That record cover looked so cool, and primitive with it's black and white photo and white lettering. It seemed almost...ummm...Hardcore, and I knew then that I wanted a copy. The problem was that since it was an early Neat Records release, and carried huge historical significance from those early days of the New Wave Of British Heavy Metal, well, I just assumed that it was rare and an expensive record, and I didn't pursue it.

Fast forward to this month, when I'm digging around on Discogs for pressing info on the Crash Bang Wallop record, and I discover that those early Raven singles actually sell for dirt cheap. At that point, I'm all in, and I go on a buying spree grabbing whatever is available. 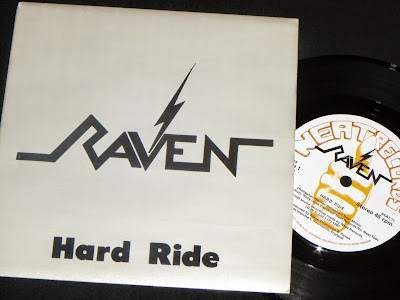 Unlike the Don't Need Your Money 7 inch, the Hard Ride single is boring as fuck to look at. Damn, someone didn't want to put much effort into the design of this one. Oh well, for five dollars, I'm not going to let it pass me by, and I added it to the collection. 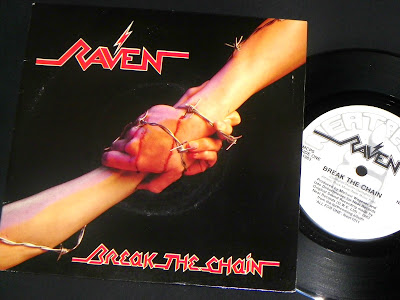 My final impulse buy was the Break The Chain 7 inch from 1983. I don't know man, Metal 7 inches are fucking cool. I've always just focused on the band's albums, and never given much thought to the singles, but owning these three records shines a whole new light on everything. 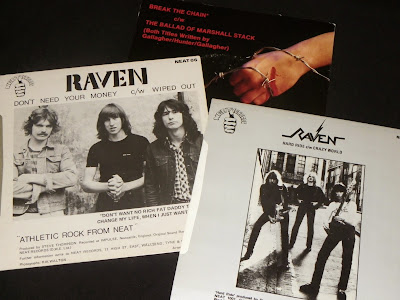 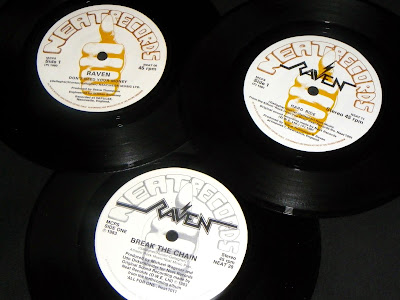 Okay Neat, what other trouble can we get up to.