There was a lot of hype for the new Turnstile album. While I was initially disappointed with the band's last record, Step 2 Rhythm, it eventually grew on me in a big way. Would I experience that same kind of disappointment with the new record? Would Turnstile be able to carry that energy level across an entire LP? While I was looking forward to Non-Stop Feeling, I was still hesitant to set expectations very high. 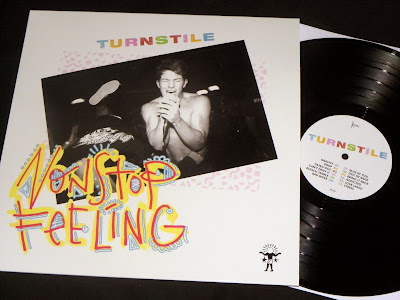 With the new album, Turnstile continue their tradition of having the worst covers art in recent Hardcore history. Ugh...I'm not feeling it at all. No pun intended. Once we get past the cover though, all is forgiven, as Turnstile deliver the goods. The songs jump off the vinyl, and soon I'm bouncing along. As I'm listening, I can't help but draw vocal comparisons to Zach de La Rocha from Inside Out...hell, even the opening riff to Fazed Out kind of reminds me of a Rage Against The Machine song. Considering how hesitant I was going into this, I'm surprised at how much I'm loving it. Record of the year so far. 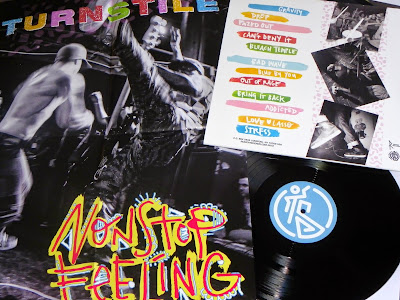 While I'm not impressed with the front cover, I do dig everything else about the packaging for this LP. The back cover looks great, the poster conveys the energy that band brings to the stage, and the lyric booklet is pretty sweet. 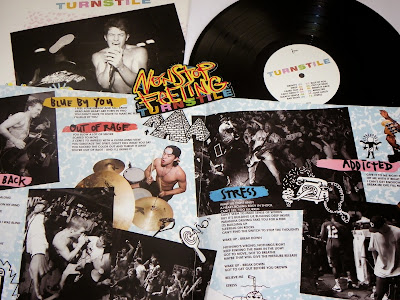 There was a time when I would have ordered every available vinyl option for this record, but for this LP, I only ordered the one copy. I limited myself this time around for a couple of reasons. First of all, I didn't want to repeat the experience I had with the Take Offense record from the year before, when I spent a ton of money on multiple copies, and then album ended up being a disappointment. One copy of that record would have been sufficient.

The main reason that I only ordered one copy was that I was fed up and disgusted. Record collecting is fun, but I've started to feel taken advantage of when labels churn out an endless supply of limited colored vinyl pressings. Reaper gave us three new pressing each of the two Turnstile 7 inches at the start of 2014, and I bought one of each...six new pieces of vinyl. Then as we approached the end of the year, the label was back with four more pressings of each EP...throw in shipping and I'm looking at another $50 to try and keep up...and then on top of that, we get five different pressing for the Non-Stop Feeling LP? Fuck off. It isn't fun anymore. If the reason that labels like Reaper keep flooding the market with different pressings is because people keep buying them, then I'm not participating.

'Record of the year so far' made me laugh.

I agree. When I saw another repress of those 7"s at the end of the year, I decided to give up. I didn't even get any first press copies of each. So I'm left with second and third press copies only. No special covers, nothing. So now I'm not sure what to do. Sell up, stay as I am, try to get the first pressings... not sure. I guess overall I'm just not that interested.

would buy that patch if they release it separately, thing looks dope

I'm on the fence too, Marcus. Since I'm not really planning on collecting the whole lot at this point, what is the point on having the number that I do? Do I sell some stuff off, and put it to more important shit that I'm missing, or keep it as a memento of where my buying habits were at the time. I hate selling stuff and then regretting it later.

Wei, I think you may be talking about the sticker that Reaper threw in the package. There is no patch...but now that you mention it, that would be pretty rad.

Haha, funny, ...the cover would easily fit to some 80´s pop music. I am still waiting for my copy.

Keep the rarest one or two from the first press (to keep feeling like a collector!) and pitch the rest. You won't miss them. I promise.
With all the money from the 2014 Turnstyle represses, you could have bought Jaguar - Power Games and Tank - Filth Hounds!

exactly my thoughts on inside out and rage against the machine! love the vibe of this record. so fresh!