A while back, Marcus was asking about bands that have a sound similar to Stone Dagger. While he isn't a Metalhead, even he couldn't resist how good that 7 inch is...like most of us, those two songs weren't nearly enough, and he was craving more. In an effort to steer him in the right direction, Doug made a few suggestions. One of those bands was Eternal Champion. 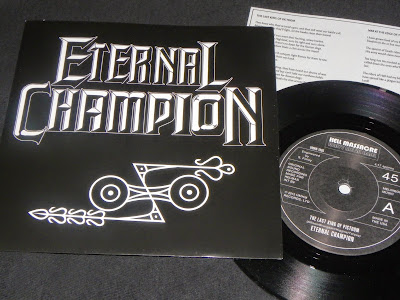 Doug has mentioned Eternal Champion to me in the past, but other than a quick listen on bandcamp, I didn't pay much attention. Still, the guy would not stop talking about them, and I finally broke down under his never ending praise, and sat down to really see what they were about. Damn. I don't know why I drag my feet on some of his Metal recommendations, because he always ends up being right. Eternal Champion are straight up old school Metal, and I was surprised to find that Jason Tarpey of Far From Breaking/Iron Age sings for this band. Man, he has come a long way from those youth crew Straight Edge days. He grabbed one of the Iron Age guitarists, threw in a few other musicians, and deliver these two great songs. Give me more.

While there were 800 pieces of black vinyl pressed for this 7 inch, I was surprised to find it was sold out at each distro that I checked. I started to panic, but was relieved to find a seller had one available over at discogs.

the game was also on point