End Of A Year

2008 is behind us, and it's time to reflect on another year of music. The year was certainly strong for both Hardcore and Metal. For 2007, I only made top 5 lists, but with so many great releases over the past year, I could easily stretch it out to list my top 10. Even with so many great new records coming out this year, my aquisitions were down in numbers. This year I only added 279 new records and CD's to the collection....down from 362 in 2007. The number of seven inch records (38) and LPs (111) stayed reletively the same from last year to this year, but the number of CDs (55) and burned CDRs (75) took a big hit....dropping by almost 100 compared to last year.
It was a strange year for Hardcore. I expected big things from the big three, Have Heart, Verse, and I Rise, but in the end, only Verse managed to sneak into my top 10. The top 3 were easy enough, but the rest were diffictult to place. So, here you go, my top 10 hardcore records for 2008. 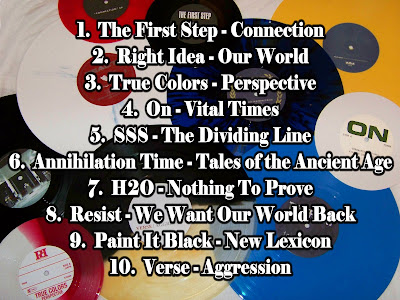 The year also surprised me with a bunch of strong Metal releases. Fantastic "comeback" records from Metallica and Testament top the list, rounded out with some solid new Thrash albums. 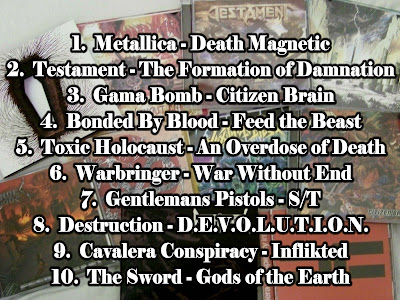 Good stats here. I love stats. I wish I could do the same, but I don't have a way of counting what I added. Oh well. Good to see the Gentlemans Pistols LP in your list too.

I love stats as well...and can get really geeky about it. That's why I use the OrangeCD database, http://www.firetongue.com/. It keeps everything cataloged, and it lets me upload it online so that when I'm at work wondering what color I have of the Voicebox 7 inch, the info is at my fingertips. It is a lot of maintenance to keep it up, but for me, it is part of the fun.