After spending the majority of my time chasing down new releases at the end of 2016, it feels good to be hitting up eBay and the discogs marketplace on a regular basis again...obsessing over which hole in my collection I want to fill next. With my current musical focus shifting from Metal over to early Punk, it is taking considerable restraint to not lose control and snatch up big ticket items one after the other. One of the albums that has been getting repeat spins in my daily playlist lately has been the first album from The Adicts. This has to be one of the most fun punk albums of all time. I can't listen to this thing with out bouncing around like an idiot. Truly a band doing their own thing. 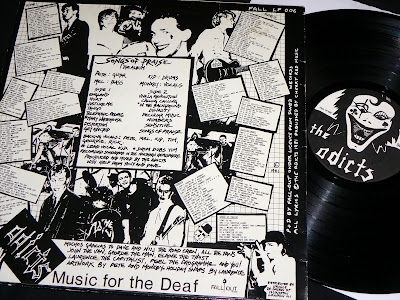 When I stumbled upon a US seller on eBay with an auction for each of the first three albums from The Adicts, I knew that I wasn't going to walk away empty handed. Songs Of Praise is the best from The Adicts' catalog, and I was happy to score that one with a winning bid.

While I was hoping to score an original 1981 first press on Dwed Records, the Fallout reissue from the same year, suits me just fine.