Yeah, sometimes I'm a little slow. Last year, both Doug and Sandwell tried to turn me on to the hype of High Spirits. I gave the band a couple of casual listens throughout the year, but I failed to see what the big deal was. I even revisited the band, downloading the band's newest album, You Are Here, as both of them kept going on and on about how it was going to make their Top 10 lists for 2014. I wanted to get into High Spirits, but I still found myself wondering what the big deal was. I didn't understand why they liked this band so much. 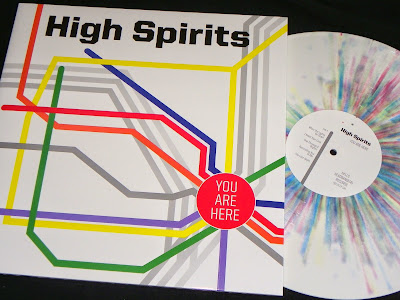 Sometimes things will connect when the time is right. Earlier this year, I was listening to the Dagger LP a ton...I was spinning it daily, and was really digging their straight forward, melodic Metal approach. I couldn't get enough of that album, and suddenly I was reminded that High Spirits played a similar style. I checked out that You Are Here album again, and it finally clicked...in a big way. 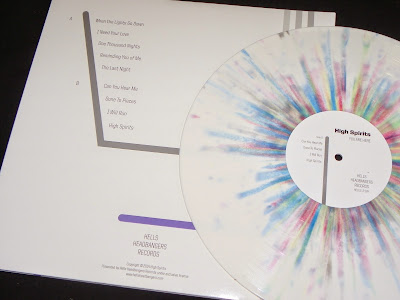 Soon, I was listening to this album daily, and I new that I needed the vinyl...soon. I started checking the around at a couple of distros, but came up empty handed each time. Had the vinyl for this already sold out? In a panic I hit up eBay...saw what I wanted and didn't hesitate to click Buy It Now.

I'm not typically a fan of splatter vinyl, but I'm really digging this multi color on white pressing. 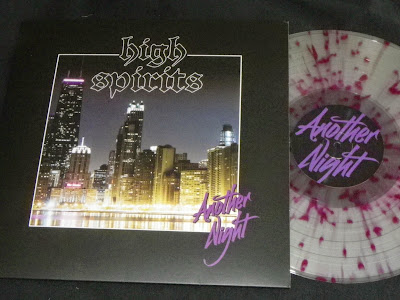 As I was buying the You Are Here LP, I noticed that the seller also had High Spirits' 2011 LP, Another Night, available as well. I was riding a high on the band, so I dropped that into my cart as well. 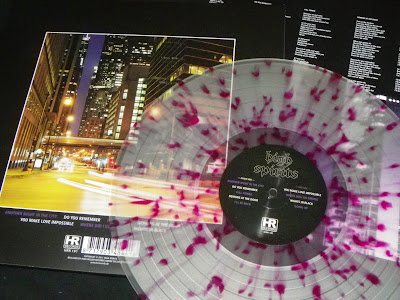 How is it that I didn't care much about this band when I first heard them last summer, and now I can't get enough of them? Once again, I end up looking like a fool when I initially ignore Sandwell and Doug's recommendations. You'd think that I'd learn.