Last month, Hells Headbangers released the Bat demo on 12 inch vinyl. While I was initially disappointed to not receive the colored vinyl for that release, in the end I found that the black vinyl actually looked better, so I was okay missing out on the more limited pressing. With the release of the new Bat 7 inch, I was not going to be satisfied unless I had my hands on that limited red vinyl pressing. 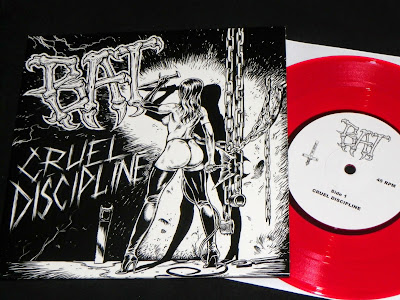 Just like with the demo, I was visiting the Hells Headbangers webstore once or twice a day, refreshing the page for the Cruel Discipline 7 inch, just waiting for the record to be available to order. My persistence paid off this time, and I got what I wanted. 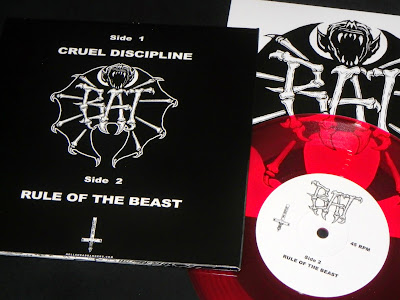 As a teaser for their new LP that is due out later this year, Bat released a two song 7 inch. Well, since the b-side song, Rule Of The Beast, was originally from the demo, we really only get one new song here...but damn, it is worth it. Cruel Discipline picks up where the 2013 demo left off. Fast and raw...this song rules, and increases my anticipation for the new album.