Accept Some Metal On Vinyl

A few years ago, I was still occasionally taking the cheap and convenient way out when it came to new Metal albums, and buying the CD. There were times where the vinyl was only pressed in Europe, and I just couldn't be bothered with dealing with overseas shipping. It seemed like too much work when I could just grab the CD from my local record store. It seems like the story of my record collecting is based on going back to fix these kinds of stupid choices. 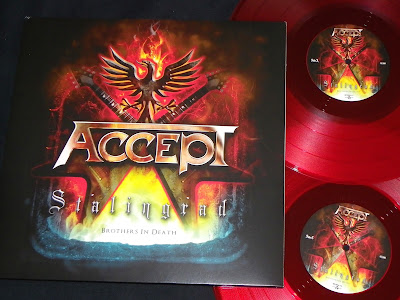 After a 14 year hiatus, Accept was back in 2010 with a new album and a new singer, replacing the irreplaceable Udo. Much to my surprise, I absolutely loved that first album with ex-TT Quick singer, Mark Tornillo, on the mic. Blood Of The Nations was a statement that Accept was back, and with each release after that debut, the band makes a strong case that they aren't fucking around. Accept is here to stay. 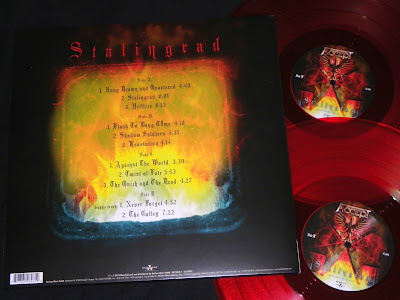 When I was recently on a shopping spree over at the Nuclear Blast Germany webstore, I saw that they had Accept's second "reunion" album, Stalingrad, in stock on vinyl. I'd been on a Blood Of The Nations binge lately, so I did not hesitate to add the red vinyl for Stalingrad to the cart. After owning the CD of this for the past 3 or 4 years, it felt good to finally add the vinyl to the collection.