I spend a lot of time over at the Bravewords messageboard, where it is Metal talk 24/7. Someone recently posted a poll, pitting 6 or 7 lesser known 80's Metal albums against each other, and the clear winner for me, among the choices, was the Hallow's Eve classic, Tales Of Terror. Surprisingly, there was another album that seemed to attract a bunch of attention from the voters that I'd never even heard of before. Seeing how Cities released an album on Metal Blade, I suppose it was only a matter of time before I stumbled upon them in my quest to own the early catalog from that classic record label, but with the amount of attention it was getting in that poll, I made a mental note to check the band out at some point. 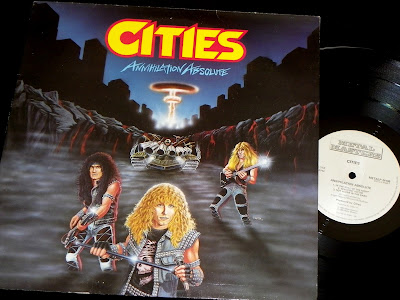 When I was shopping downtown a few weeks back, I was surprised to find the Cities LP sitting in the Used Metal bin...even more surprising was that it was the UK pressing on Metal Masters. Even though I'd still never listened to the band before, I figured it was worth the gamble. 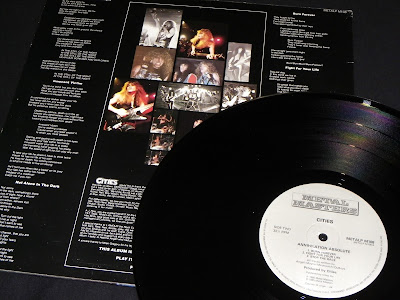 Apparently, Cities' claim to fame was that AJ Pero (R.I.P.) from Twisted Sister played drums on their Annihilation Absolute LP. Seems as though Pero was with Cities in the early days, but jumped ship to join Twisted Sister. When Cities first released Annihilation Absolute as a six song 12 inch in 1985 on Metal Masters, AJ Pero was not included on this initial release. However, in 1986, the drummer returned to Cities and they re-recorded those initial songs, along with three others for the Metal Blade LP release.

This is pretty decent mid-80's Metal. Nothing too exciting, and not even close to beating Hallow's Eve in any poll, but still it reeks of denim, leather and studs, so it is still a fun listen. Given the differences between the original UK pressing, and the Metal Blade release, I'm obviously going to need both at some point.